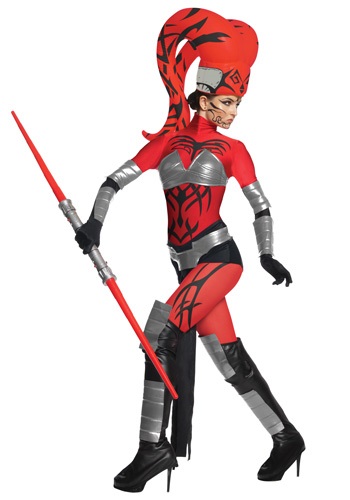 Say what you will about the Sith, but they are known for their dedication to the Force (specifically the Dark Side of it), their lightsaber skills, and if we're talking the new One Sith order, their utter devotion to their master. That's why you can't take half measures if you're truly serious about joining the darker (and some would say more powerful) counterpart of the Jedi order. Stepping into the shoes of one of the most formidable Sith of all time, Darth Talon, is one way of showing you're not messing around. And in this impressive Adult Deluxe Darth Talon Costume, there will be no doubt that you're a force to be reckoned with!

The anointed hand of the evil Darth Krayt, Talon is known for her awesome powers, including lethal skills with a lightsaber, the ability to use Force lightning, and control over the minds of men and beasts alike. Filling the shoes of this awesome Star Wars "expanded universe" character is clearly no light task. But you'll rise to the challenge in this suit, which is fully loaded with striking details from head to toe. It includes six pieces, from the tights, to a "turtleneck" style shirt, boot covers to go over your footwear, and an inflatable vinyl headpiece that captures Talon's unique Twi'lek features perfectly. You'll truly be an imposing and otherworldly presence in this stunning suit!

There's only one last thing you'll need to join the One Sith order... and you know exactly what is: a lightsaber (with a red blade, of course)! Luckily, you need not venture far, because we sell a wide selection of them here!