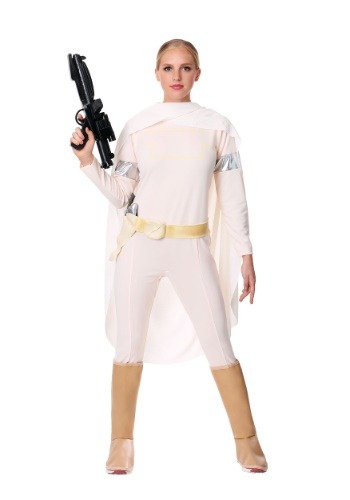 In the Star Wars galaxy, it makes sense that there is always at least one war going on. And while there have been some pretty epic struggles over the millennia, few compare to the impact of the Clone Wars! Dress up as one of the heroes of the Old Republic in this official Deluxe Padme Amidala Costume, and lead the fight against the Separatists like she did in Attack of the Clones!

Of course, this is a pretty heroic look even if you're not in the middle of an intergalactic struggle between good and evil. Padme wore this stylish uniform when she traveled from planet to planet as a Republic senator, gathering intel for the war effort and keeping an eye out for the danger that could be around every corner. If you're heading to a costume party or Star Wars convention, and you aren't planning on making any stops on Geonosis or Naboo, where you might get caught up in a firefight between battle droids and an army of Jedi-led clone troopers, this outfit will get the job done on your mission, too!

This deluxe costume is officially licensed, so it captures all of the details of Padme's ensemble from the movie. The white one-piece jumpsuit and matching cape are perfect for a planet-trotting adventure, or for leading the fight against the separatists at your costume party! It also comes with faux leather boot tops and an accessorized latex belt for added authenticity.

The mission might get a little dangerous, so it's a good idea to have allies at your side. Rally all of your friends wearing our Clone Trooper and Jedi Knight costumes, and it will make an unstoppable Star Wars group theme. And if you don't mind, just let us know how it works out saving the galaxy? We're sure you're going to do great!