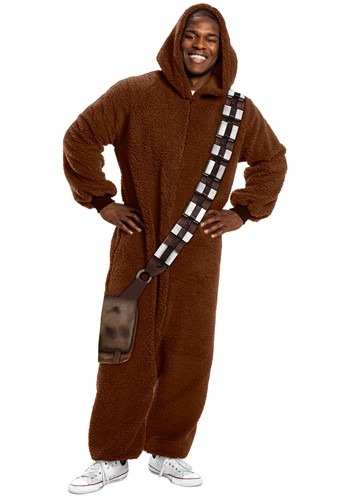 You know, most Wookiees never make it off of Kashyyyk. It's not surprising. Kashyyyk is a temperate jungle planet, where you can spend all day lazing around in the Wroshyr trees, sipping on sapwater and growling pleasant conversation with your best buds. But that's just not Chewbacca's style. He just can't sit around with a whole galaxy out there to experience. He also just can't stand by when the Empire tries to do dastardly things to the good people of the galaxy! That's probably one of the reasons he gets along with his best bro, Han Solo.

If you're the type that needs to set out on adventures, then it might be time to dress up like your favorite Wookiee from the Star Wars universe! All you need is this Chewbacca Jumpsuit, which is officially licensed and officially comfy!

This Star Wars Chewbacca Jumpsuit is an adult size costume that recreates the look of your favorite character from the movies. It comes with a simple jumpsuit made out of a soft, polyester material (don't worry, no Wookiees were harmed in the creation of this costume). The jumpsuit fits with a zipper down the center of the suit and it even features an attached hood that you can wear to help you feel like one cozy Wookiee. It's so comfy, you could almost wear this Wookiee suit like a pair of pajamas. The bandolier resembles the one that Chewie wears in the Star Wars movies and it even has a faux satchel on the side. Once you suit up in it, you'll be ready to travel the galaxy in the Millennium Falcon.

Headed to a Wookiee themed music festival? Well, prepare to be ultra-comfy by dressing up in this comfortable Wookiee suit!