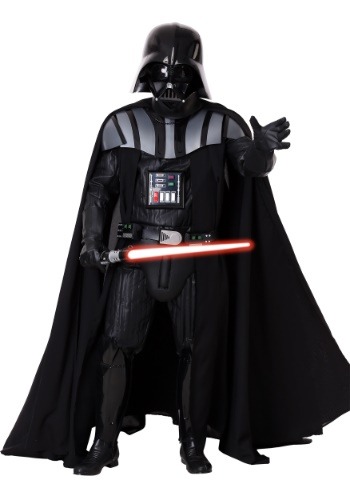 It's quite simple, really. There are only two ways to become the deadly Sith Lord responsible for the collapse of the Jedi Order. You could spend years training as a Jedi, then walk a troubled path between light and dark before you finally snap and end up hunting down any Jedi who opposes you, only to be defeated by your former Master, Obi-Wan Kenobi. Then, you'll finally be reconstructed as a mechanical-humanoid hybrid by order of Emperor Palpatine. The other option is to gear up in this Ultimate Edition Darth Vader Costume. We think it's a lot safer option! Sure, it might lack the suspense of all that other stuff, but who really wants to get stranded on Mustafar, burning alive with most of their limbs chopped off by a lightsaber? Trust us, just get the licensed outfit instead.

This Ultimate Edition costumes brings you a realistic version of the iconic costume seen in the original Star Wars trilogy. It comes with a black robe, a hood, and a cape. Each piece is a made out of a poplin material and is designed to recreate the garments worn by Darth Vader. It also features a faux leather jumpsuit, which acts as a base for the armor pieces. The molded armor pieces are made out of ABS plastic and include a helmet, should armor, and shin guards. Each piece is an injection mold that we recreate from original Lucasfilm molds. The chest box attaches to the front with webbing straps and recreates the tech panel on Darth's costume. Combine that with the array of belts, boxes, and other accessories included with this costume, and you'll be ready to command the entire galaxy!

Questions & Answers
Q: Are the cape and under cape machine washable? It was quite wet for Halloween and the cape picked up quite a bit of water and dirt. Most of it shook off, but it really needs some additional help. (1 Answer)
Asked by Anonymous | November 4, 2022

Monster Responds...
Hello! Since this costume is one of the highest quality and most expensive costumes we sell, we recommend that you hand wash this costume to insure it isn't damaged while being cleaned.
Answer
Ask a Question
Reviews
4.3
(9 Reviews)
5 Stars
44%
4 Stars
44%
3 Stars
11%
2 Stars
0%
1 Stars
0%
Write A Review
Sort By Most Helpful
Filter By All Ratings