The Best Costumes in Star Wars: The Force Awakens 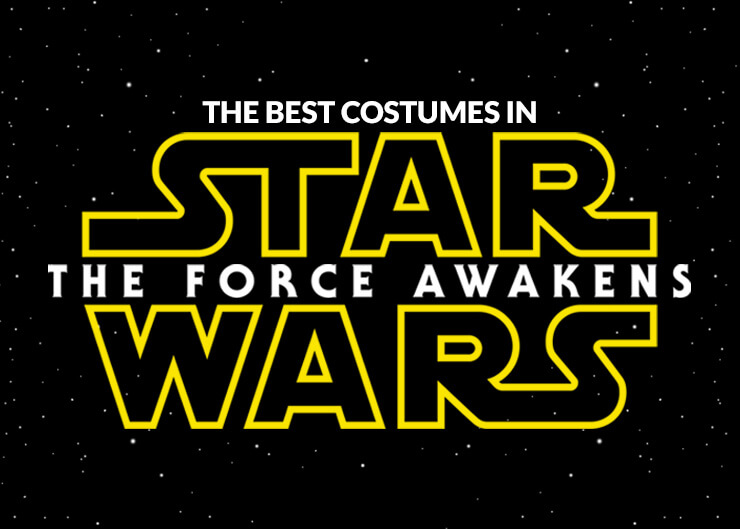 A (not so) long time ago in a galaxy (not so) far, far away…
Star Wars fans have long been analyzing, obsessing, admiring, and even recreating the many classic costumes seen in both the original Star Wars trilogy as well as the prequel trilogy, and we’re happy to tell you the trend has continued with the release of The Force Awakens. It’s not just an act of ritual for long time fans; the new costumes in The Force Awakens (or TFA as it is often referred to on message boards and Star Wars fan circles) are made with such care, attention to detail, and unexpected awesomeness that reverence for these new costumes are just as justified as our collective admiration for the simple yet wicked elegance of the Vader suit or the enigmatic heritage of Boba Fett’s Mandalorian garb. This list goes through our standout favorites from the TFA newcomers—the cream of the galactic crop—and we might even have a few little tidbits sprinkled in about how the costumes inform the characters, their war-torn world, and how the dynamic between the mysterious First Order and the struggling Resistance continues to inspire our love for that galaxy far, far away. 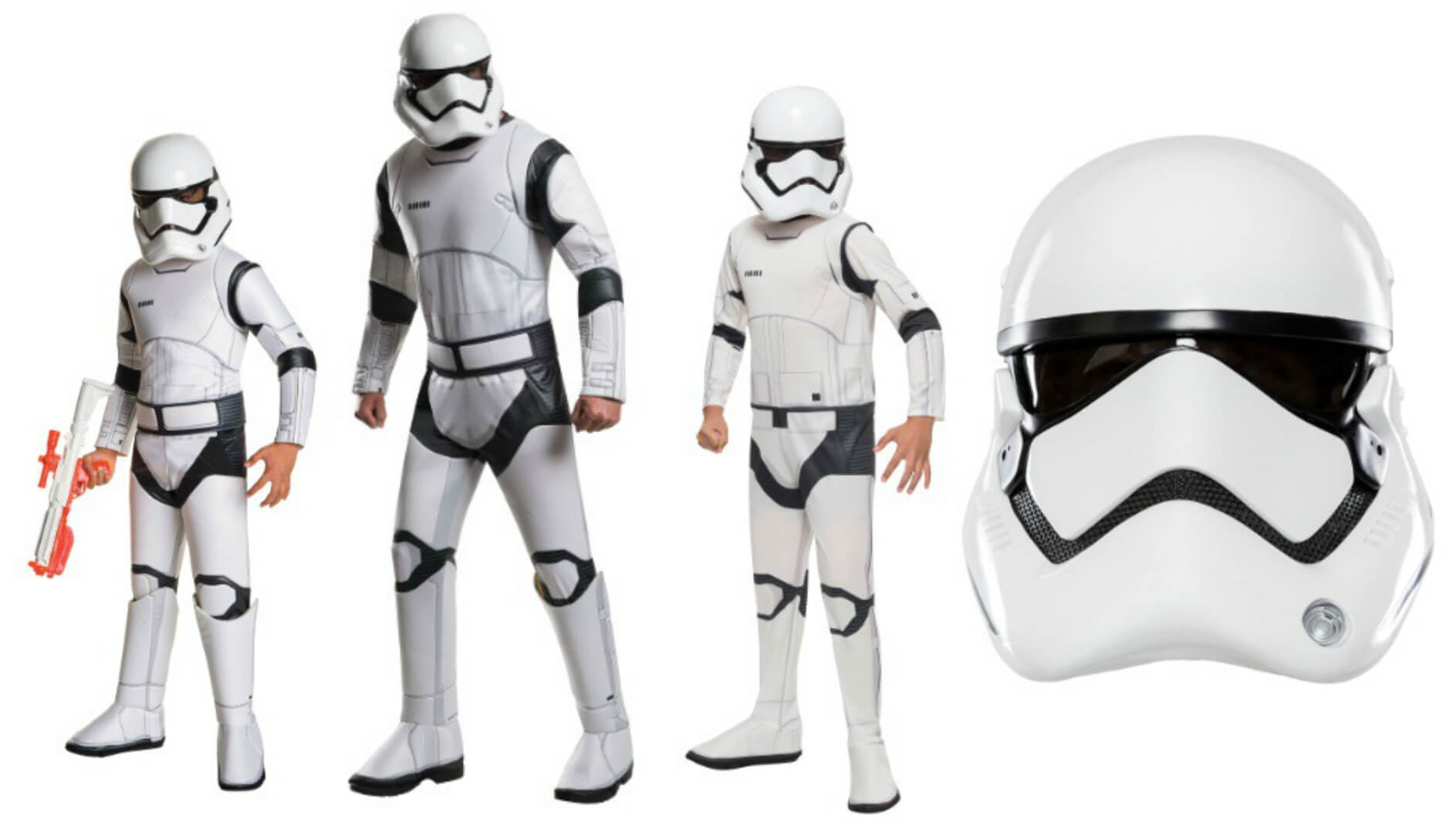 There’s a classic scene in Star Wars: A New Hope where Han solo runs down a corridor on the first Death Star, ready to face the whole Empire himself, war cry and all, until he turns the corner and sees what looks like every Stormtrooper on the station crammed into one room all poised to kill him. Han, of course, runs in the opposite direction and avoids becoming blaster fodder. In the original trilogy, the Imperial Stormtrooper was a threat in numbers and less so individually. Even in numbers, they were beaten by an inexperienced moisture farmer, teddy bear creatures with pointy sticks, and let’s not forget about the one that bumps his head on that door.
The Force Awakens seems to have changed the Stormtrooper formula. Their armor, while recognizable, is sleeker and more refined, not unlike the way we look at first generation iPhones in comparison to their latest version, and every detail is upgraded for effectiveness from the lenses to the rebreathers to the flexible mesh under-suit. This new kind of Stormtrooper is versatile and dangerous in training, attitude, and technology making them a formidable opponent for the Resistance in any capacity. 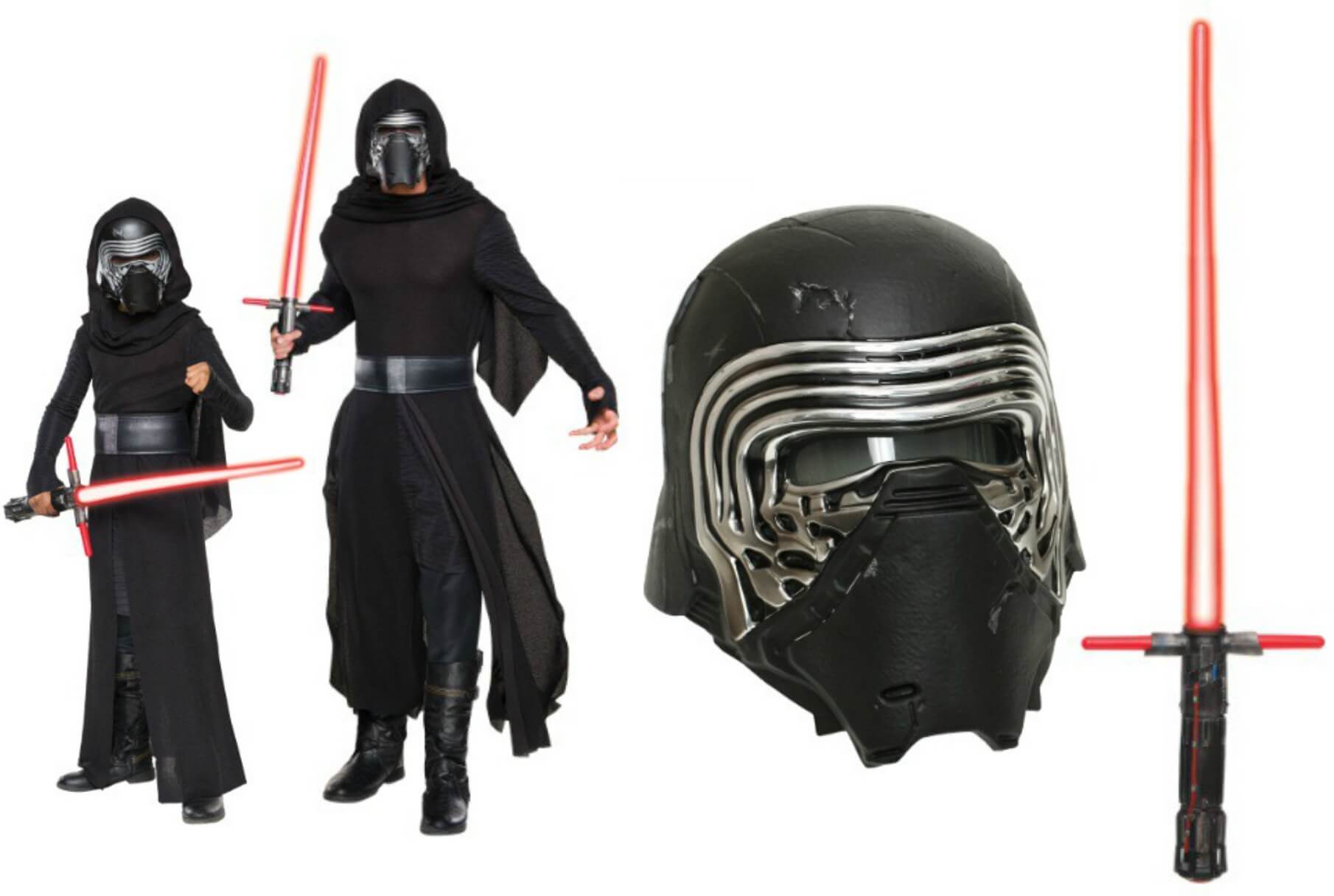 After more viewings of TFA than we’d rather admit, we still don’t know that much about Kylo Ren. We know who his parents are, we know who he admires more than anyone else in the galaxy, and we know that he serves a giant blue hologram, but beyond that? Anything is possible. Even before we saw the film we knew we were on board with his malevolent goals whatever they may yet turn out to be, because his costume and helmet took such radical inspiration from Vader that his appeal could not be denied. The Ren helmet is an obvious take on the Vader helmet; a rear lip jutting out harkens back to WW2 German helmets in our own world, which is no mistake. The front, however, is a major departure from Vader. Star Wars fans might see some similarities in the face of Jedi Master Plo Koon, or from the expanded “Legends” universe character Darth Revan, but the end result is original. Ren’s look is dark, bleak, tattered, certainly a reflection of his own inner character—such descriptions could describe both his costume and his outlook. He is just a boy after all, being torn in two by the dark side and the light, and his costume manifests that for viewers. He may be evil, but his evil is not solid and confident in the way Vader’s was (and his iconic suit show), but more damaged and confused. There may be hope in Kylo Ren yet, but if he is ever to turn to the light side he will need a change in clothes—something lighter, airier, and hopefully less ragged. 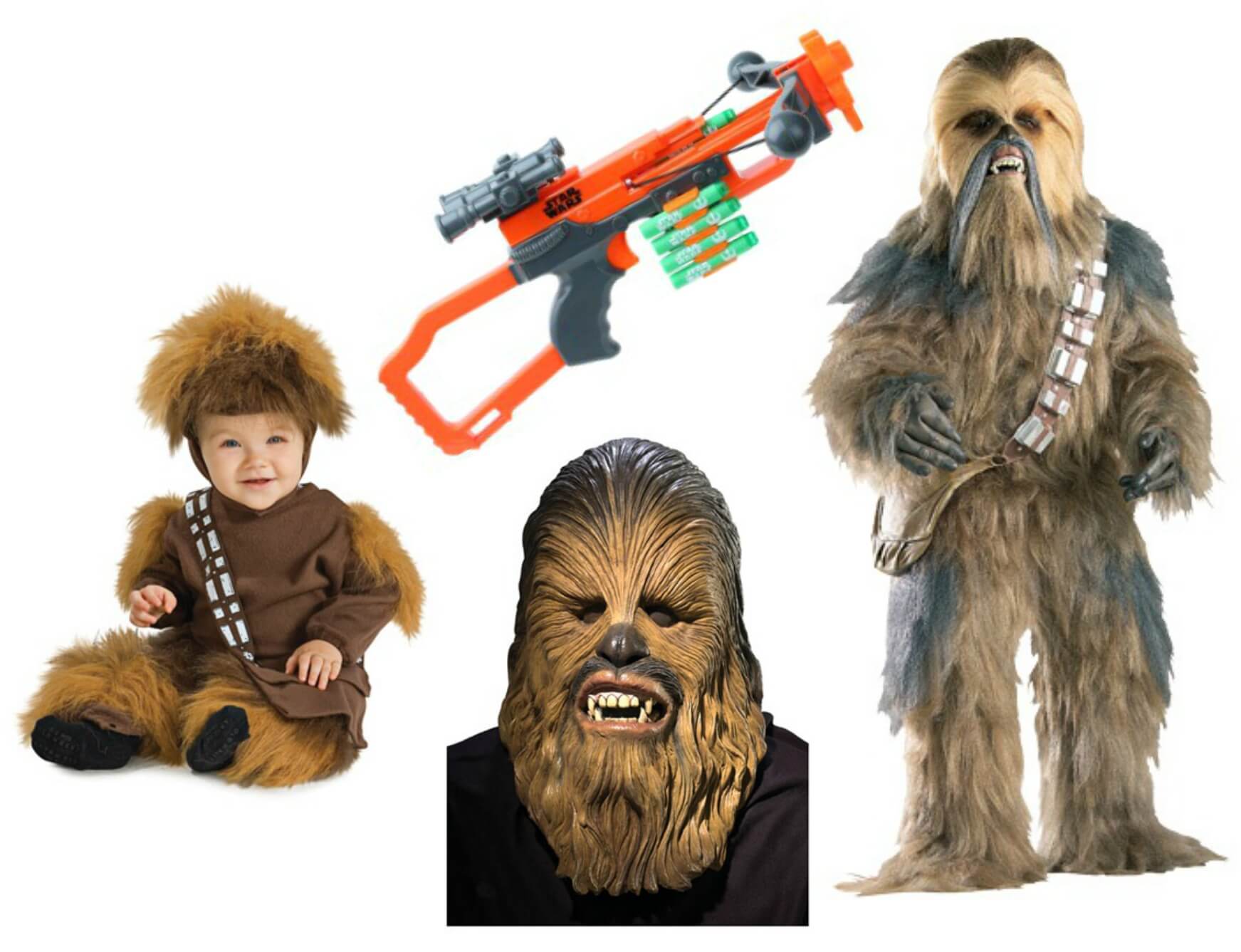 You caught us. It’s true that Chewbacca doesn’t change a whole lot in TFA from any of the other films, but being such dedicated Star Wars fans we knew we couldn’t make a list like this one and exclude our beloved walking carpet co-pilot. Perhaps the bigger curiosity here is that Chewbacca hasn’t seemingly aged at all; he even still wears that exact same bandolier we saw him wearing all the way back in Episode IV. A quick little search told us that Wookiees can live up to four hundred years, and with that much time on his hands you’d think Chewie would explore some new fashion accessories, but apparently he likes to keep it simple. He found what works for him and he’s sticking with it. You can actually spot lighter strands in his fur and he might be a little thicker than in previous films, but overall he’s still the same old Chewie and just for that, he deserves a spot in our hearts and a spot on this list. 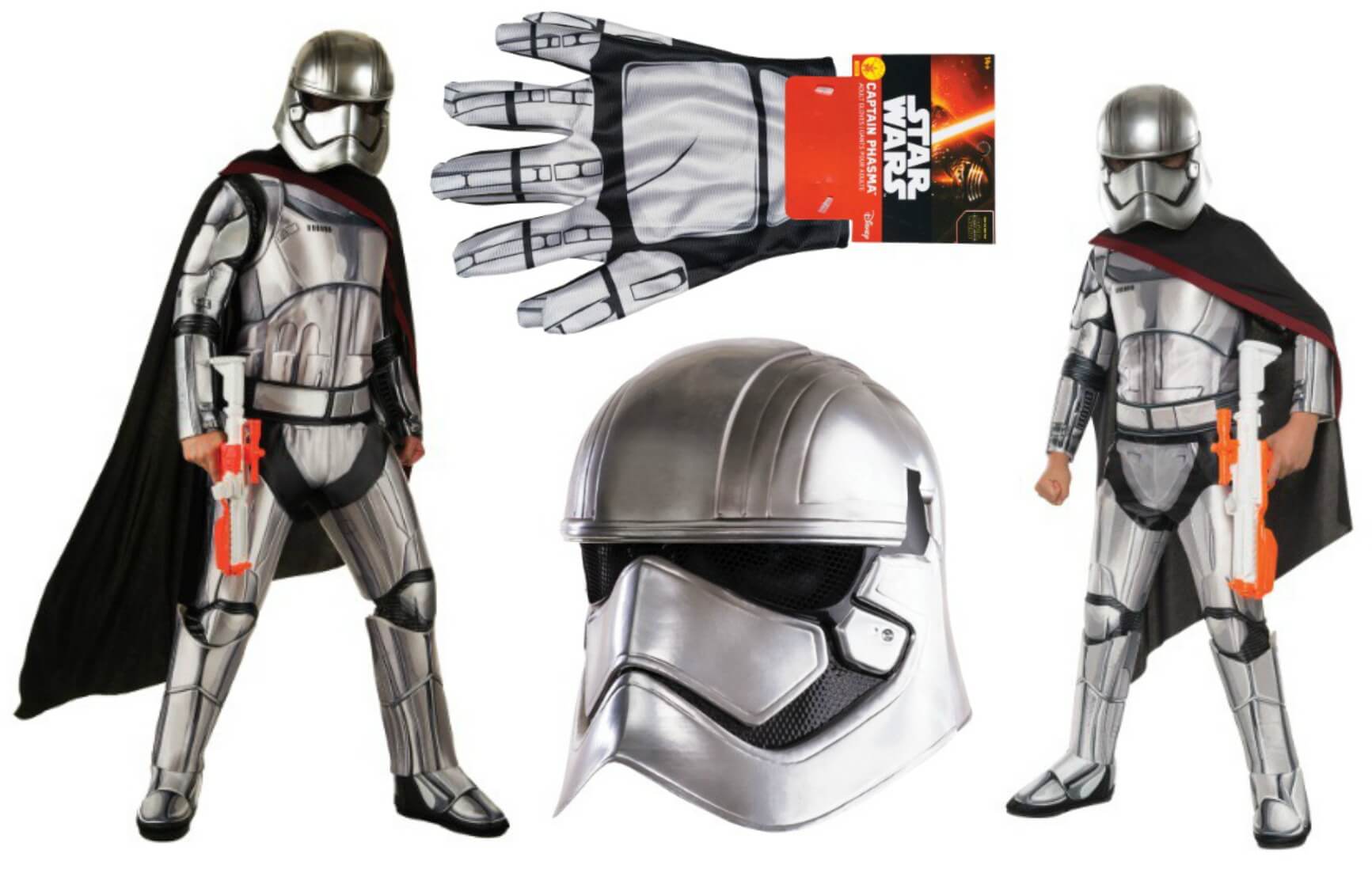 Captain Phasma is the opposite of every other First Order Stormtrooper and Officer. Where the typical Stormtrooper is meant to be anonymous, without identity, and only be one of many, Phasma stands out as an individual, a leader, and a formidable soldier on the field. Her uniform gleams with a substance called chromium, a radiation-resistant metal taken from Emperor Palpatine’s own Nubian yacht as seen in the prequels, and her First Order cloak adds the suave sophistication of an officer. Phasma’s uniform is a combination of opposites and unexpected details. A woman in a male-dominated role without some kind of gendered armor (a choice by the filmmaker’s that we applaud wholeheartedly), a helmet similar to a Stormtrooper’s but with a sharp bottom edge and stylistic grooves, and a bare metal finish armor set that feels subdued and menacing all at once. We can only hope her role continues to grow in this new trilogy, because we want to see a whole lot more of her character in action. 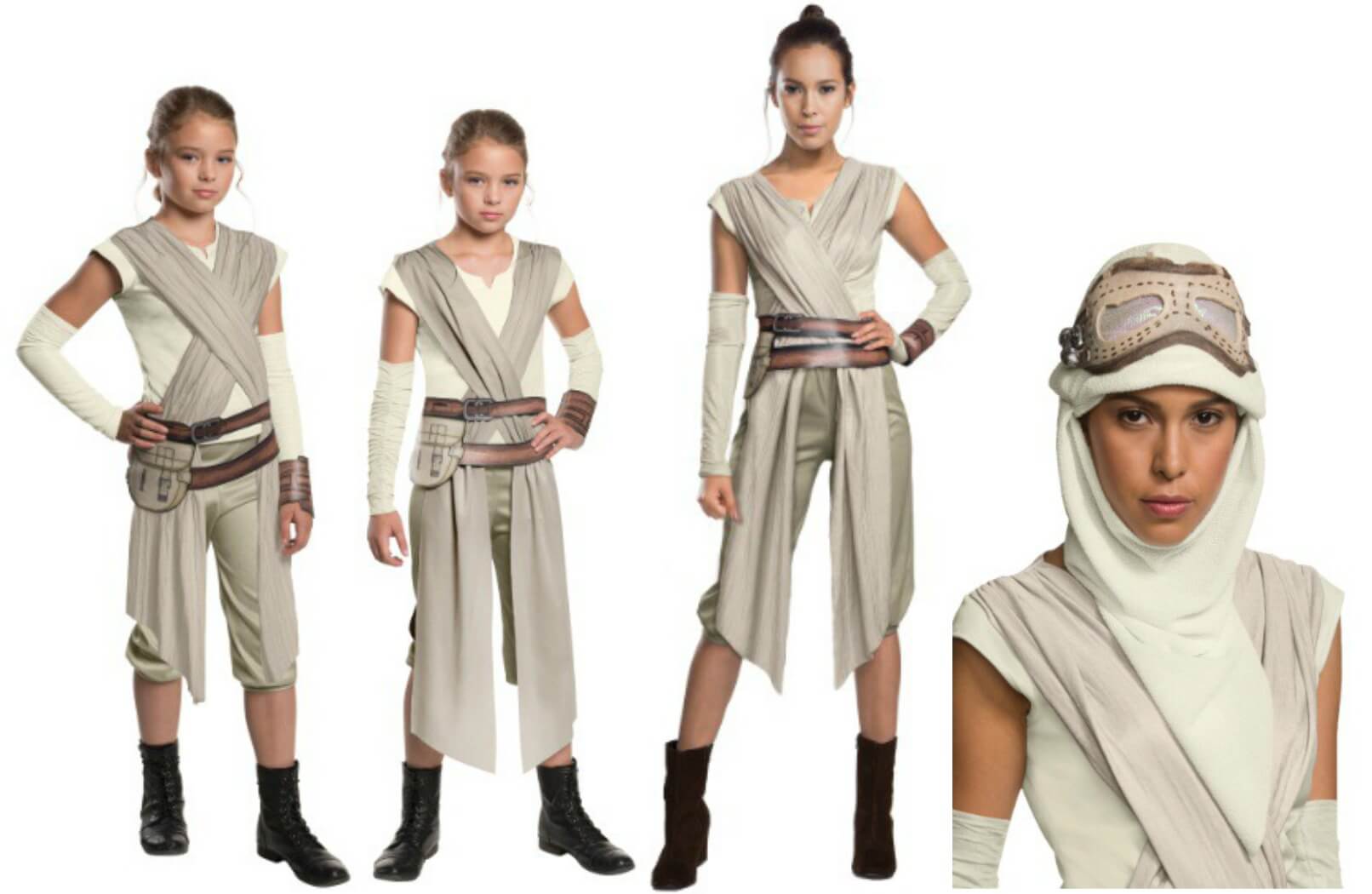 The protagonist of TFA is Rey, a young girl with unknown parentage living on the sandy and desolate desert planet of Jakku. Her introductory scenes show us her desperate, cyclical lifestyle; a simple scavenger gutting any valuable remnants she can find out of an old fallen AT-AT and a downed Star Destroyer left over from an ancient Rebel and Imperial battle. This kind of harsh climate calls for a certain type of clothing that allows for ease of movement and limited exposure. Because of the hot sun, Rey uses simple airy wrappings to block her skin from the elements, and her goggles are made of Stormtrooper helmet lenses, showcasing her abilities as a capable scavenger and craftswoman. Those simple wrappings (the same kind that Luke wore before her) are proof of a humble beginning on the Outer Rim of the galaxy where promise of adventure, heroism, and realization of destiny are as rare as the food packets she trades to survive. We have no idea what is going to happen to Rey on this journey, but we hope we see her in classic Jedi robes in the next film, on her way to becoming one of the greatest Masters of all time. 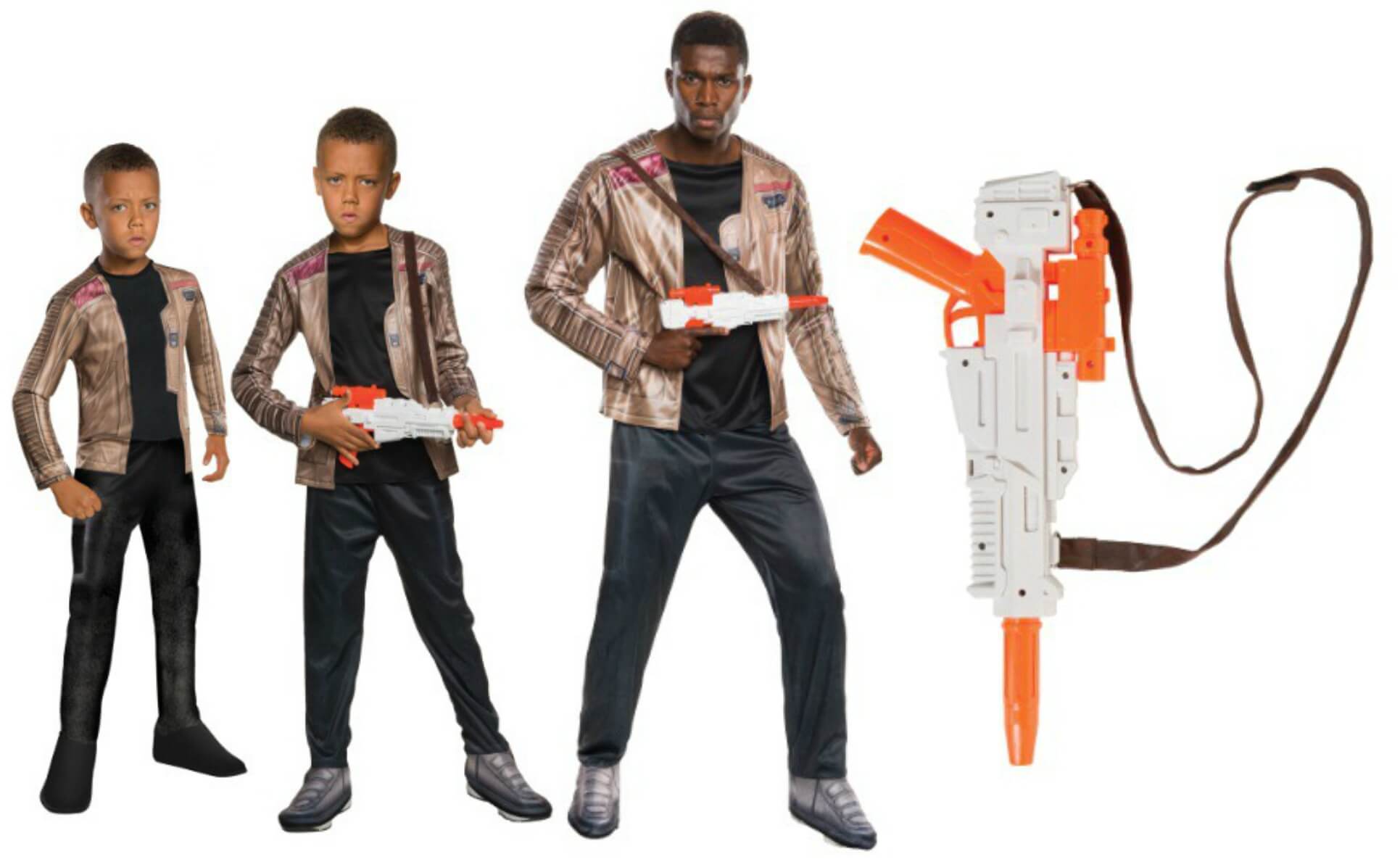 Finn makes the largest costume leap in TFA. When we first meet him, he is a First Order Stormtrooper, one of the many, engaging in a small village slaughter. Soon he is emblazoned with a bloody handprint across his immaculate white helmet, and with that, he is forever changed inside and out. His inner struggle comes to an end—he is not meant to be an anonymous killer, and so he escapes with Poe Dameron and through some odd space antics of which Star Wars characters are prone, Finn adopts Poe’s civilian jacket. Finn uses this to blend in on the planet because the jacket is totally unremarkable: a simple beige, leather-like material with red accents, the kind of thing you’d see a hundred times over at any spaceport across the galaxy. The costume reflects Finn’s character and story—his identity is not fully formed yet. He is a defected Stormtrooper and a Resistance imposter for most of the film, so of course he borrows aspects of his costume from both of those worlds. By the end of the film he comes into his own, and we’re sure in the next film he will finally get an iconic costume to reflect his storied crossover to the Resistance cause.

While we wait for Episode VIII…

We will have to continue analyzing, obsessing, and admiring the costumes from Star Wars: Episode VII The Force Awakens until 2017 when Episode VIII (to be titled) comes out and adds fresh new costumes to the fan fold. If you want to become your favorite characters from any of the Star Wars films including The Force Awakens, you will find all your favorite Star Wars costumes right here on HalloweenCostumes.com. Do you have a favorite new costume, or do you have any other fun facts and tidbits about the costumes mentioned in this list? Please let us know in the comments below. And may the force be with you.