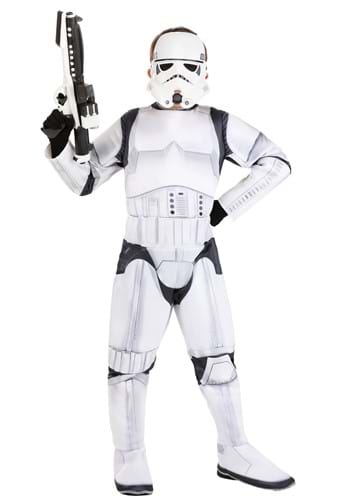 Aren't You a Little Short for a Stormtrooper?

Every evil emperor needs an army of trusty henchmen. If your soldiers have armor that conceals their faces, it's a good idea to have them all be roughly the same height. That way, you can tell just by looking at them if they're your loyal guards, or if they might be a Jedi trying to rescue a Rebel princess and destroy your space station. Of course, if they start using a lightsaber, that's a dead giveaway that the Stormtrooper is not who he appears to be.

Defend your dark master - or infiltrate his ranks to take him down - while wearing this officially licensed Stormtrooper Costume for Children! The outfit includes a one-piece jumpsuit that fastens up the back. It's printed all over with graphics that look like Stormtrooper armor, including "breastplate" details, printed buttons, leg armor and more. Attached shoe covers fasten under each foot with an elastic band. A molded plastic Stormtrooper half mask covers your face.

These Aren't the Droids We're Looking for

Do you want to have an exciting adventure guarding a planet-sized superweapon, tracking down rogue droids, and fighting off surprisingly fierce teddy bear creatures on Ewok? Then becoming a Stormtrooper is the job for you! Grab your blaster and prepare to follow your Emperor on his quest to become the supreme ruler of the Galaxy. While you're at it, try not to get AT-AT or TIE fighter duty. Those things are both cool, but surprisingly flimsy.