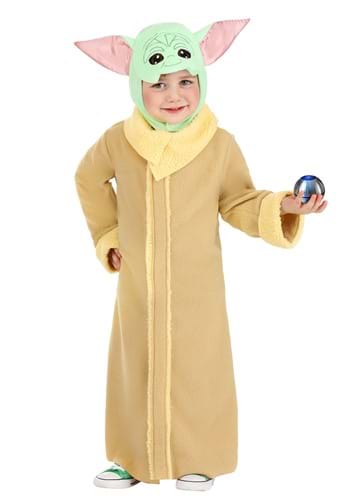 The Cuteness Is Strong With This One

Do you often catch your toddlers trying to use the Force? If so, then we have good news for you! One, you are definitely raising them right. Two, you can make their wildest dreams come true this Halloween when you grab them this Toddler Grogu Costume!

The lovable Grogu is ready to partake in Earth's sweetest tradition. Dress your kiddos up as "The Child" and let them run around the neighborhood collecting tasty treats. Just make sure to keep an eye on them. They could end up eating a frog or two. Or even worse, end up being hunted down by what remains of the Galactic Empire. Hopefully, you have some Beskar armor to wear. You'll need it to rescue your kiddos from Moff Gideon and his Stormtroopers!

This costume will come with everything your toddlers need to bring their favorite little green alien to life for Halloween. Simply fit the long tan robe on them. It is designed to resemble the baggy robes Grogu is seen wearing throughout the majority of the Mandalorian series.

Once you strap the hood under your kiddo's chin, you'll really start to see the transformation. The hood has Grogu's large ears attached to its sides as well as his cute face embroidered on the front. While Din may have let Grogu walk around barefoot, we wouldn't suggest that for your little one. We think a pair of moccasins or green slip-ons would be perfect to complete this costume!