Pulse Rifle Accessory for The Mandalorian 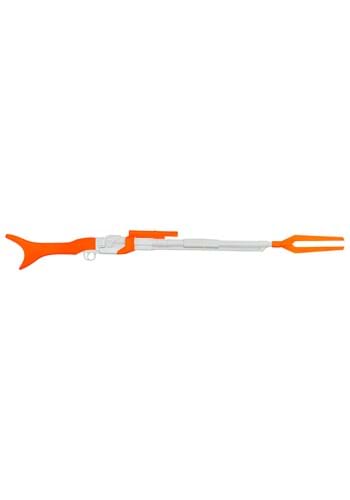 To think, it all started in the Star Wars Holiday Special...

That's right. You know the really rad gun that the Mandalorian carries with him all of the time? Well, it's first appearance was back in 1978 on a certain holiday special that some people like to forget ever happened. Boba Fett showed up, looking like a total renegade, blasting baddies and taking names with that weird, but awesome, fork-shaped blaster of his. Well, the folks who made the Mandalorian too, because they armed him with the same blaster. And now, you can arm yourself with this Mandalorian Pulse Rifle Toy!

Inspired by the blaster on The Mandalorian, inspired by the blaster on the Star Wars Holiday Special, this toy blaster will have you ready to shoot your way through a whole Sandcrawler full of Jawas... except this one doesn't actually shoot plasma bolts. It does, however, look great when you pair it up with your Mandalorian costume! The toy blaster is made out of plastic and comes in multiple pieces. When fully assembled it measures approximately 42 inches long. Baby Yoda will be safe from harm when you have this toy blaster in your hands.