Star Wars: The Rise of Skywalker! The Mandalorian! Galaxy’s Edge! Star Wars is pretty much everywhere right now, not that we’re complaining. We’re obviously huge fans. When it’s Halloween, we wear our Star Wars Halloween costumes…and when it’s not Halloween they become regular ol’ Star Wars costumes! We wear them to movie premieres and conventions and just because. So get comfortable and we’ll show you all the most popular designs, plus an accessory or three. That’s right, these are the Star Wars costumes you're looking for!

Let’s start by looking at the biggest Star Wars costumes for adults. Not “big” like size—although we did include a few plus-size Star Wars costumes—we’re talking more about popularity. From Luke and Leia in the original trilogy to Rey and Finn in the sequel trilogy to Queen Amidala in the prequels, these are the most popular Star Wars Halloween costumes out there. 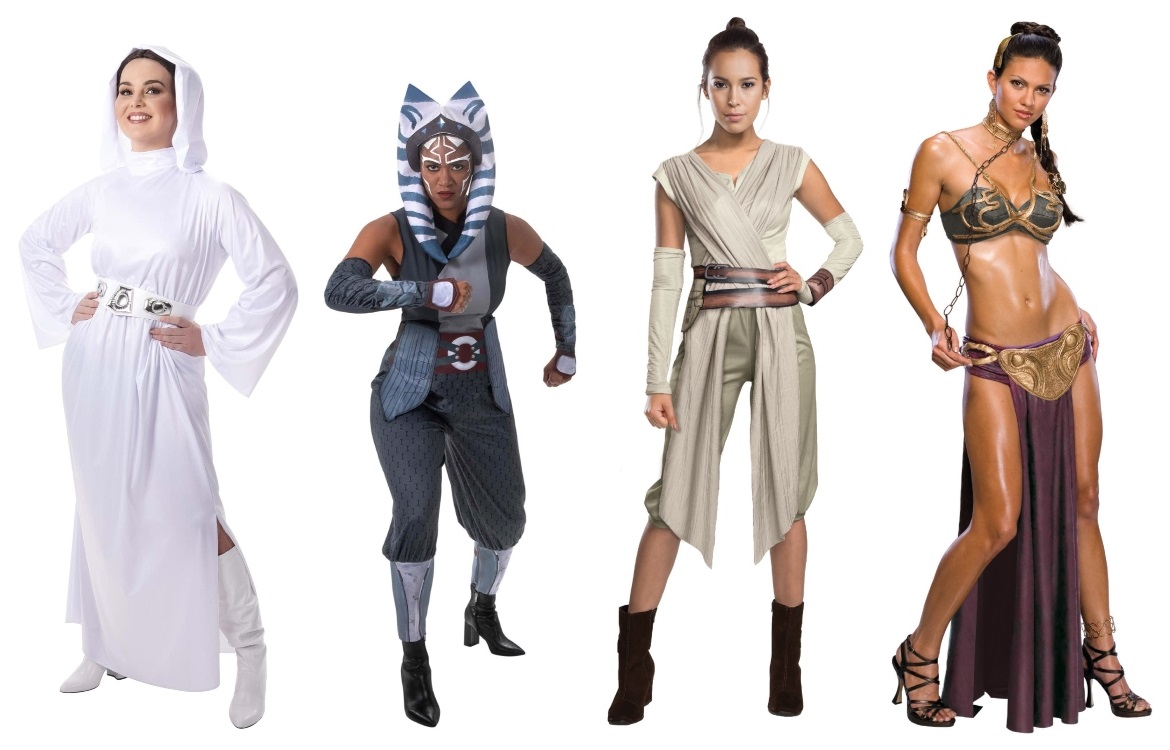 Star Wars features plenty of women protagonists and antagonists and their outfits change throughout the films and TV series, which means there’s quite a variety of women’s Star Wars costumes to choose from. When it comes to a Rey costume, for example, there’s Rey’s The Force Awakens costume and Rey’s The Last Jedi costume. Soon enough we’ll have Rey’s The Rise of Skywalker costume! Then you’ve got Princess Leia’s costume from A New Hope and her costume from Hoth in The Empire Strikes Back. What we’re saying is that there not just one Rey “Star Wars costume” or “Princess Leia costume”. (We think you get the idea!) Of course, Star Wars isn’t only about Leia and Rey. You can also buy a Darth Vader or Stormtrooper costume for women, or Captain Phasma armor or Queen Amidala’s throne room dress (also known as the “Red Invasion Gown”). It’s always good to have options, right? 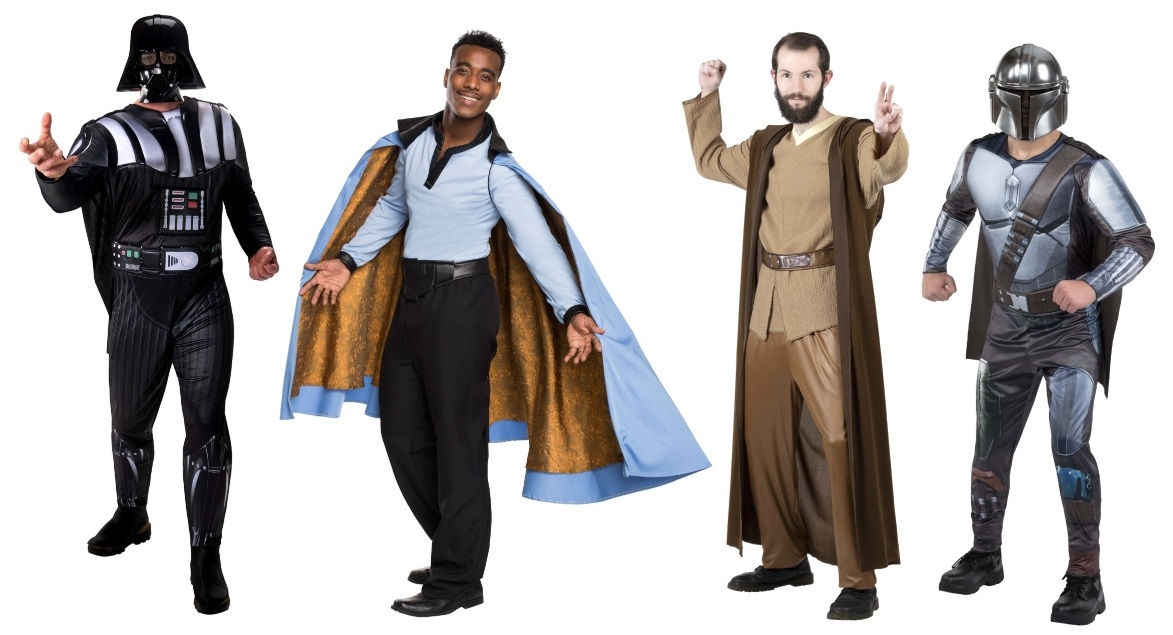 Did someone say options? Just like with the women’s costumes, our men’s Star Wars costumes come in all kinds of varieties. You can get the Luke Skywalker costume from The Last Jedi, or remove the beard and swap for a Jedi robe and look like a younger Luke. (Add some regular black clothing for Luke Skywalker’s Return of the Jedi costume.) Then there are classic Han Solo costumes or the slightly more colorful Solo costume. Our Darth Vader costumes range from a basic top and mask to the “authentic” costume that looks great on Halloween or in a display case. And then there are Stormtroopers, again with a range of qualities, including plus-size Stormtrooper costumes. We don’t want to beat the same old thunder drum here, but it’s all about options, options, options! 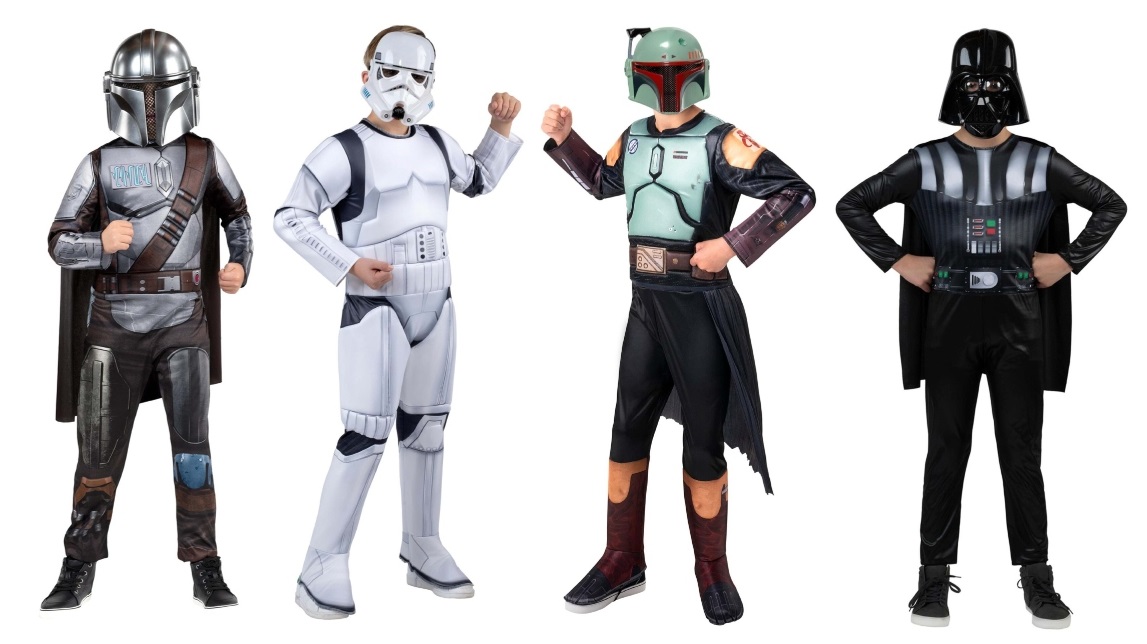 First up are the boys’ Star Wars costumes. For older boys, you’ve got a variety of Kylo Ren costumes, Praetorian Guards from The Last Jedi, and even a Boba Fett costume. With The Mandalorian on Disney+, expect Boba Fett costumes to get more popular. (Sure, he’s not in it, but it’s still an iconic look and Mandalorian costumes are all reasonably similar. Plus there are plenty of DIY costume options!) It looks like C-3PO will have a pivotal role in The Rise of Skywalker, so don’t overlook the boys’ C-3PO costume! For toddlers, there are all kinds of Droid costumes like R2-D2 and BB-8, plus Porg and Chewbacca costumes.

Next are the girls’ Star Wars costumes. Much like the women’s costumes, there’s plenty of variety here. You can choose Rey’s costume from The Force Awakens or The Last Jedi, and Leia costumes from A New Hope or The Empire Strikes Back. Then you can find a girls’ Darth Vader costume or a Queen Amidala dress, not to mention R2-D2 and BB-8 costumes! Girls can also get Ahsoka costumes, Stormtrooper costumes, and sometimes even dress versions of the costumes we’ve already mentioned.

Alright, so here’s the deal: while there aren’t any official “Baby Yoda” costumes from The Mandalorian yet, there are Yoda costumes for toddlers and babies that are totally adorable. Adults can even wear a Yoda headband to get those green ears, and don’t forget the green face makeup to finish the look. So it’s totally possible to put together a Grogu costume/Baby Yoda DIY with what’s out there right now! We’ll also mention some other Yoda costume options later on.

You can’t forget about the Star Wars accessories, right? Whether you’re putting together screen-accurate outfits or just need props for low-key, easy Star Wars costumes, then we can help you out. Most characters carry a lightsaber or a blaster—and sometimes both—so start there. You can pick from basic light-up lightsabers to high-end Black Series Force FX lightsabers! You can also use these accessories to augment or upgrade your current costume. For example, you can add a wig or Rey’s mask and hood, or replace a less-expensive mask with this Kylo Ren helmet. Another option is to get Yoda hands and feet and a walking stick to complete your adult or Baby Yoda “The Child” costume!

Okay, we know what you’re thinking! “Pet Star Wars costumes? That seems far-fetched.” But Star Wars costumes for pets are all the rage because everyone loves putting their pooch in something adorable. Plus they’re paw-some and paw-fect and plenty of other dog puns that we can’t think of at the moment. You can find costumes for many of the main characters, from Darth Vader to Princess Leia. Then there are the much-loved Porgs, Yoda, and Wicket. There’s even an adorable Tusken Raider riding a Bantha and your doggo gets to be the Bantha!

Purim Costume Ideas for Adults and Kids
Get 20% Off