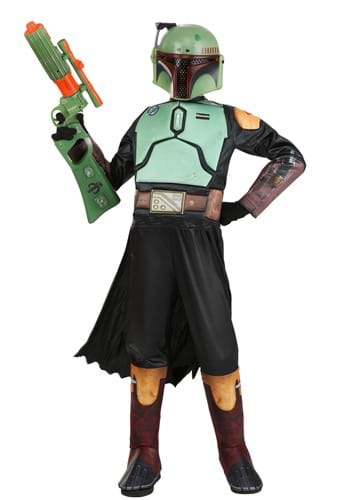 Did you really think a Sarlacc could take down Boba Fett? Not a chance. He's the most resilient bounty hunter in the galaxy! He served through the entirety of the Clone Wars, despite being involved in some of the most dangerous missions around. He worked for Jabba the Hutt, the most menacing crime lord that the galaxy has ever seen! We think it has something to do with his Mandalorian armor.

If your child is one resilient adventurer, then he may be ready to don the armor! This Boba Fett Costume for kids brings your child the iconic armor set seen in the original Star Wars trilogy and in The Book of Boba Fett. It's officially licensed... and officially awesome!

This child-size Star Wars costume begins with a black jumpsuit that has printed details and attached Qualux armor pieces. The armor pieces have details from the movie, including the Mythosaur sigil on his shoulder and Jaster Mereel's sigil on his chest. The back of the suit has a skirt to recreate his look from The Book of Boba Fett. The costume also has attached boot covers on the pants legs, so your child can wear most pairs of shoes with the costume.

Your child needs a helmet if he plans on exploring the galaxy far, far away as Boba Fett! that's why this costume comes with a molded mask, shaped like his helmet. Just strap it on and your child is ready to face any challenge!