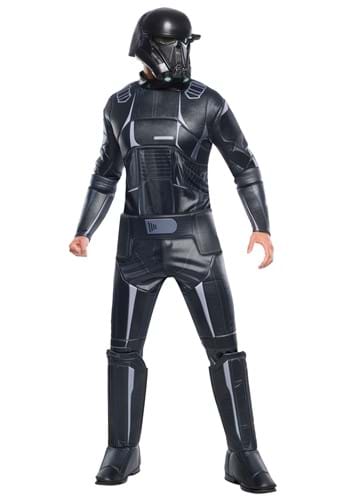 The Dark Side’s One Weakness

First, there were the Storm Troopers: Silent, cruel, anonymous. Until Finn removed his helmet, we never saw a Storm Trooper’s true face.  These sterile white, faceless soldiers were chilling in their anonymity, ruthlessly carrying out their Emperor’s evil will.

Well, they tried to, anyway. In the history of the Empire, not one Stormtrooper has ever succeeded in shooting someone with a blaster. (It’s true. Check the history books). This made it very difficult for the Dark Side to win battles. Palpatine was getting frustrated. He hired a different marksman to instruct his super soldiers in the skill of actually blowing enemies away.

“Try pointing your weapon at your target!” the marksman suggested. But the Stormtroopers just couldn’t master the skill. To give his campaign of “destroying everything” better odds, Palpatine had the bright idea of creating a more accurate task force.

Succumb to the power of the Dark Side in your Star Wars Death Trooper Super Deluxe Costume for Kids! You’ll be the terror of the galaxy this deadly black jumpsuit with printed-on armor and attached boot tops. Sling the belt around your hips and throw on the two-piece helmet and mask combination to hid your face while you wreak havoc on rebel planets. Marksmanship not included.

It’s the trooper you don’t see that will get you! Strike terror into the Jedi’s hearts by your ability to accurately wield a blaster. It’s a good thing that the death troopers weren’t part of the Battle for Endor. We doubt that teddy bears wielding sticks and rocks could have defeated them.