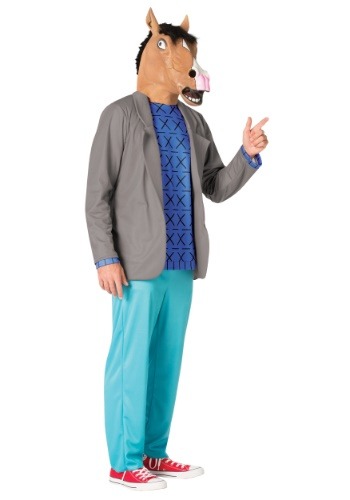 Life as any kind of animal is full of its own challenges even if you're a Hollywood star. Actually, it might be more difficult when you're a (let's face it) somewhat washed up star. You have to go to extremes to show the world that you still deserve a spot in the public eye. When poor Bojack isn't receiving the love that he believes he deserves he pulls some crazy stunt. For instance, when his crush stayed with the happy Mr. Peanutbutter he decided to steal the "D" from the Hollywood sign. Romantic? Well, maybe? We don't really think so. But it is pretty dramatic! Bojack is good at being dramatic. He's a Hollywood guy, after all. He might be a little brash, a little heavy-hooved but he's still so lovable. He can be so open and so honest! Makes sense, a horse is a horse is a horse, of course!

When you're dressed in this ensemble, you'll look just like a Hollywood star. You'll get a bright blue pair of pants, the dark blue sweater that's reminiscent of the wild prints that he's been wearing since his old show. Top it all off with the latex horse mask and a surly sensibility and you'll be ready to make another debut.

If you and your friends are ready to get real this Halloween, group up in our variety of Bojack Horseman costumes. Friends can choose between Princess Caroline and Mr. Peanutbutter, someone could even put together a Todd ensemble. Why leave the roommate out of this real-life adventure? You'll be feeling as fancy as a pony on parade. Everyone is sure to recognize you from their favorite sitcom about adopted orphans that aired in the nineties. Just be sure to get comfortable signing autographs. After all, you're a star!