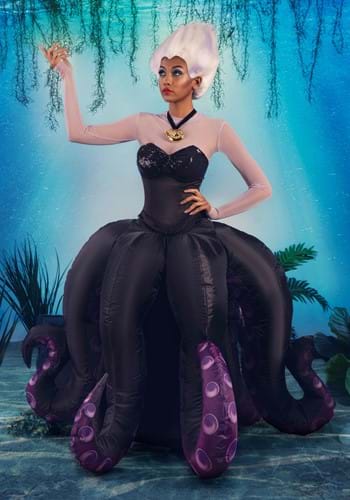 You always know you're about to see something life-changing when the screen goes dark, the music grows mysterious, and the animated magic begins to flow. That's when things are about to get real and that's when lasting memories happen. Sure, it happened when Captain Hook gave that first sinister grin, when Cruella DeVille's eyes widened at the barking sight of her future coat, and it happened when we first saw a certain sea witch twirl her tentacles.

Nothing will ever compare to that fearsome feeling for Ursula. She commanded both the waves and our attention as she claimed all of Atlantica for herself! If there is a Disney villain that even hopes to compare to her sinister skill and macabre magic, we don't think we've ever heard of her! Ursula is an actress, a singer, and confident in her curves! It's finally time to experience her iconic flair and command attention with this amazing Ursula costume.

Stretch your tentacles this Halloween in our officially licensed, Prestige Ursula costume from The Little Mermaid! Designed after Disney's illustrious animation and Pat Carroll's superb vocal performance, this complete costume begins with a lavender mesh shirt with long sleeves. The black dress features a shiny, sequined bustier and a thigh-length skirt that transforms into layers of sheer black and purple glittery fabric. Stride on land in your Vanessa style and, when you're ready to take to the seas, breathe life into the inflatable skirt around your waist and stretch out your six exquisitely detailed tentacles (with the help of the magic of four AA batteries, of course). Take hold of the magical conch shell around your neck and you'll be ready to sing (or steal) your way to the magic trident. If you really want a winning performance, add on some violet body paint and our Sea Witch wig to complete your transformation!

The Boss is on a Roll!

All should know the tales of the Sea Witch. They should probably know to stay away, too, but who can resist chatting up the greatest Disney villain ever. You will truly rule both land and sea in our exclusive Ursula costume!