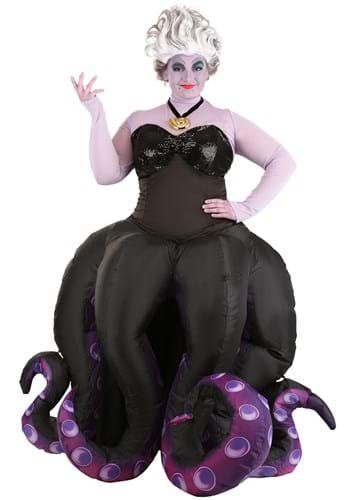 We have to wonder who would make the ultimate ruler beneath the waves. Triton and his daughters are pretty solid candidates. They've got their looks, their pretty face, but none of them really can pull off the magic of body language, can they!? With their singular tail, they're pretty darned limited, even with the magical mojo of the mighty trident. (Plus, Ariel spends all of her time focused on collecting trinkets that she doesn't even know how to use!)

We figure that the true queen of the coral is none other than Ursula, the sea witch! Let's face the truth. Not only does Ursula have six times the tailpower that the mermaids can muster, but she's also got her own magic to pull all the pranks a Disney villain could dream of! If you agree, not only do we think you can help put Triton in his place, but you might be just the person to transform into the epic enchantress, herself! (And we won't even need your voice.)

Get your singing voice ready and pick your favorite potions, because it is time for you to swim into this officially licensed Little Mermaid Ursula Prestige Costume! Whether you want to help out a handful of poor, unfortunate souls or show the world that you've got what it takes to conquer the ocean, a single night in our exclusive Ursula look will have you feeling part of every world. The costume includes a long-sleeved mesh shirt that gives you a lovely lavender look. The dress features a sequin-trimmed satin bodice with a black skirt that hugs your hips and has overlays of knit mesh & glittery tulle. Bring the wonder of the waves when you inflate the wrap-around overskirt to gain the writhing tentacles of your favorite witch! With your look complete, all you need next is a king to dethrone! (Of course, you can pick up our Sea Witch Wig to really match your brand new crown, too.)

If you're looking to become the most powerful being in all of the ocean, you need look no further than Ursula! Sure, the magical Trident of Triton is pretty impressive. But, that white-haired sea king doesn't know that we carry those, too! Gear up in this Prestige Ursula costume and secure yourself a crown and the command of the waves!