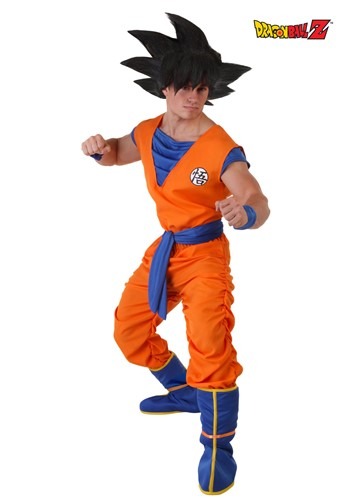 Ever since he was sent to earth, it seems like Goku can never catch a break. When he's not fending off the attacks of his violent brother Raditz, he's locked in an epic battle against Frieza on Namek, or he's facing off against the evil android Cell for the fate of Earth. Really, even when he was still a baby he fell down a ravine. What kind of luck is that? The frightening thing is, as tough as all those bad guys are, they don't even compare to how scary Chi-Chi can get when Goku's late for dinner. Maybe that's why he has to wear his fighting gear all the time, because he never knows when he'll have to unleash a Kamehameha Wave on some kind of super-powered villain, or when he'll have to dodge Chi-Chi's famous You-Forgot-To-Take-Out-The-Garbage Backhand Attack. Trust us, when you're in the thick of it, you'll be glad you brought your own Dragon Ball Z cosplay costume, recreated as the bright orange gear worn by Goku, to the fight.

It's easy to transform into a martial arts hero with this ensemble! Throw the orange shirt over your head and you're already halfway there! The purple inset is attached so you don't have to fool around with layers. You'll enjoy moving around in the loose, elastic waisted pants. Feeling tough is no problem when you've got armbands and a sash to show how much you've been training. All you need to finish this look off is a Goku wig or plenty of hair gel to gain Goku's spiky do!

Goku might never get a break but that doesn't mean he ever gives up. Add some drama to your costumed evening by teaming up with the mysterious Piccolo. No one knows what might happen but everyone knows what sure won't happen, Goku's not giving up any time soon!