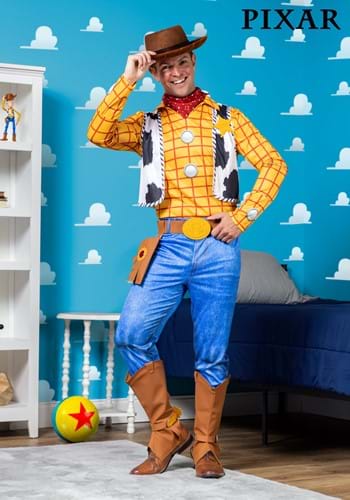 At the beginning of Disney and Pixar's Toy Story, Woody might not be the best example of a great leader. He’s insecure, jealous, and fears being replaced as Andy’s favorite by Buzz Lightyear. Of course, eventually, the two of them end up as the best of friends. Furthermore, throughout the series, Woody grows as a character and as a sheriff. He learns that sometimes, being a leader means doing what’s best for the people in your care, not doing what’s best for yourself. We think, in the end, he turned out to be a pretty swell sheriff!

Get ready for the roundup with this Deluxe Disney and Pixar Woody Costume for Adults! This detailed ensemble was designed and Made By Us so you could look just like the sheriff from Disney’s Toy Story series. It comes with several pieces, starting with a yellow shirt, cow-print vest, and blue pants that look just like Woody’s. The boot covers will turn any pair of shoes into cowboy kicks, and of course, you can’t be the sheriff without a badge! Add the bandana and belt to complete the look, and don’t forget your hat to top things off. We hope you’ll feel like a real cowboy (or at least, a real toy) in this deluxe costume!