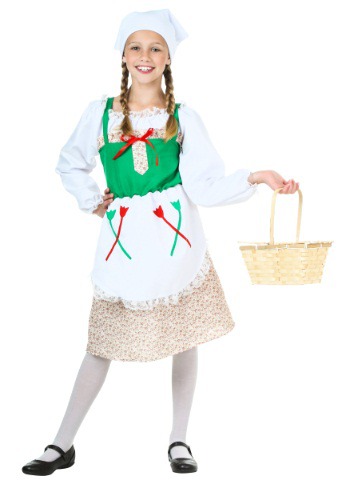 What's the same about every Oktoberfest you and your family go to, year after year? If we had to guess, we'd say it's probably the fact that no one really gets into the true spirit of the celebration. And the proof of that is in what they wear, which is just so... modern? Contemporary? However you want to describe it, you want to take a different approach this time around. Celebrating the roots of this beloved German festival is all about picking the right outfits. And we have just thing for your mädchen (that's German for "girl") to get started: the traditional German girl costume!

It's inspired by the era in which the very first Oktoberfest was held, when it wasn't even technically Oktoberfest yet! The festival that started it all was actually a royal wedding, and all the citizens of Munich were invited to attend. The rest is history. That was back in the 19th Century, when young women wore "dirndl," traditional garments that originated in southern Germany and the Alps. Made by us, this exclusive child deluxe German girl costume is a tribute to those dresses and the time they come from. It's perfect for celebrating German history, culture, and of course, Oktoberfest!

And there's no muss or fuss getting suited up. It's a two-piece costume that includes the dress (which zips up the back and has the apron attached) and a white handkerchief, so you don't have to worry about putting together a complicated outfit. Along with our many other traditional German costumes, this dress is an easy and simple way for your family to get into the Oktoberfest spirit!

Product Reviews       Write A Review1 Review
Four Stars
By Current Customer / November 15, 2018
Was this review helpful to you?YesNo
Get 20% Off