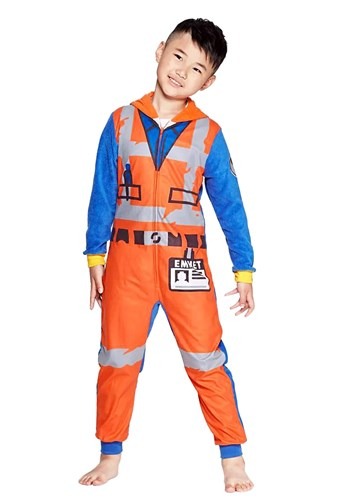 After the destruction of Bricksburg, it seemed to some mini-figs that the sun would never rise again, but it did over the more mature reconstruction of Bricksburg: Apocalypseburg. While most of the mini-fig residents adapted to the harsh new world and took to brooding and wearing edgy clothing, the Special—Savior of the Lego Universe—clung to the old ways.

Emmet may not be one for staring into the distance and narrating his dark thoughts or maturing at the drop of a Duplo block, but who would want that anyway? Right, most of Apocalypseburg. They wanted the Special to grow away from catchy pop songs and double-decker furniture. The rule-follower gave it a try and it turned out that becoming something you’re not, just isn’t the way to grow-up. What makes someone special is exactly what they should develop and use to their advantage. When the universe chooses to remember that, everyone wins.

In this Emmet Union Suit, your kiddo can embrace their own specialness, just like Emmet. Dressed in Emmet’s signature construction uniform they’ll be prepared for a day of building Lego Universes and singing along to their favorite catchy song. This cozy jumpsuit features Emmet’s name-tag, reflective tape, and the safety-orange that keeps him visible in his changing world. In this officially licensed Lego Movie 2 costume, your kiddo can follow the instructions or master build their own adventure.

Whether you’re taking your kiddo trick-or-treating or sending them off to bed, they’ll be ready for some fun as Emmet Brickowski. As the Lego Universe’s Special mini-fig they’ll be ready to build their own double-decker creations, rescue their friends, and prove that we’re most special when we stay ourselves. There’s no telling what new things they’ll come up with, but we know it’ll be awesome with this Emmet Union Suit.