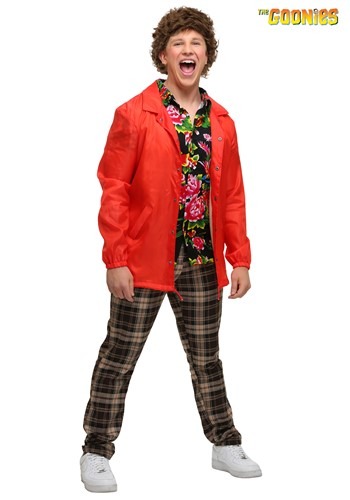 A big part of what makes the Goonies so much fun is how they each contribute their own special talents to the whole gang. If you want to look like the biggest misfit of the bunch, though, you can't get any "goonier" than with our exclusive Chunk costume, from the cult classic The Goonies!

At first glance, Chunk might seem like he's just along for the ride with the rest of the gang. Compared to Mikey's bravery, Brand's tough attitude, Data's ingenuity, and Mouth's... mouth, the only thing Chunk seems to bring to the group is the Truffle Shuffle. But this kid is the heart and soul of the gang. He's always telling jokes and making his friends laugh, even in grim situations. He may not seem like it at first, but Lawrence (as he's known in fancier circles) can be just as brave and clever as the others when they need him to be. Who else could make a theater full of people start barfing all over the place?!?

We love the whole gang, and since Chunk is the quintessential Goonie, we made sure his costume looks like it came right out of the movie. This outfit recreates his unique sense of style, combining plaid pants with a Hawaiian shirt and bright jacket. It sure takes a lot of confidence to wear these clashing patterns together, but don't let that dissuade you from sporting these threads at your next costume party. Just remember that Goonies never say die!

Product Reviews  Write A Review2 Total Reviews
Great quality for the price
By Rokablly / November 6, 2017
This costume was more than I expected for the price. It was clearly professionally made or it seemed that way. The only thing that would have made it better was if the pants and/or jacket had actual pockets for at least my keys and cell phone. My only complaint is that no one really knew who I was till they were told. Isn't everyone a Goonies fan?

Due to my measurements I was told to get a size Large which had me nervous but it fit fine.

I will definitely be purchasing my future costumes here.
Was this review helpful to you?YesNo1 person thought so and 0 didn't.

Very low quality
By Donald / November 18, 2018
This was a disappointment on several fronts.

1. These are essentially items of clothing, but both the pants and coat did not have pockets.

2. The material was absurdly warm, I was sweating within 10 minutes of putting it on, I felt like I was in one of those airtight suits wrestlers wear when they exercise to lose the last bit of water weight.

3. The pants ripped down the side within the first 2 hours of wearing the costume, the activities that turned out to be too intense for the costume involved walking and sitting.
Was this review helpful to you?YesNo
Get 20% Off