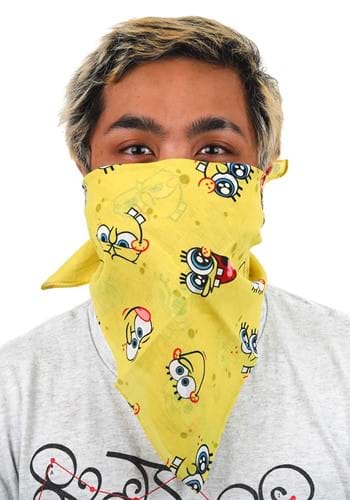 Pandemics may seem like a unique, once-in-a-lifetime occurance, but SpongeBob SquarePants is no stranger to viral danger. Remember in "Fungus Among Us," when he finds that suspicious green goo he calls "ick" on his bedroom floor? Well, long story short, he tries to clean it up, but fails and becomes contagious. Later, while working at the Krusty Krab, the SWAT team has to quarantine SpongeBob in a plastic bubble in his house. (Patrick popped the plastic bubble, of course.) Gary eventually cures everyone with his snail slime, of all things! What a journey!

Don't go bumping into anyone without this awesome SpongeBob SquarePants Bandana, measuring 22 inches in diameter and made of 100% cotton semi-sheer fabric. They could have the "ick," after all. While it's no medical-grade PPE, the bandana will brighten your day and everyone you cross paths with. We think it might even get that old grouch Squidward to crack a wry smile. Best of all, it's officially licensed, so you can worry less about the quality of the character art and more about what cool yellow digs to pair it with. You'll have everyone smiling, without a worry in the world -- least of all some obscure plague called the "ick."