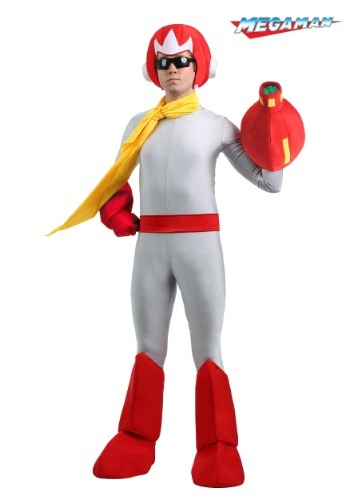 Mega Man 3 was a pivotal moment in the Mega Man franchise.

We're not talking about the introduction of Rush, the Blue Bomber's faithful robot dog companion, or even the slide move. (Can you even imagine a Mega Man game without the slide move now?) We're talking about the mysterious robot who challenged you in the middle of Magnet Man's level. Who WAS that robot? And those sunglasses? Way cool! Although he seems like an enemy, there's almost something friendly about him! Of course, later, we'd find out that it was Proto Man, the robot created before Mega Man and that he's on a mission to help stop Dr. Wily, spoiler alert. Yes, the third installment of the game cemented his role into the Mega Man universe and we've even made a costume of the red-clad robot!

Based on his many appearances in the Mega Man video games, this Proto Man costume will transform you into Dr. Light's first successful robot! The silver colored jumpsuit is reminiscent of the classic colors of the character, while the glove, headpiece, belt and boot covers add that flash of red that he's known for. Of course, the costume comes with a polyfoam proto buster that fits on your arm, so you can blast bad robots. Finally, what Proto Man costume would be complete without a dash of his cool style. This costume comes with his yellow scarf and a pair of dark sunglasses to finish the look off! Once you have it on, all you have to do is find a few robots, like Guts Man or Snake Man, so you can steal their powers and use them to blast down Wily's UFO. You can do it!