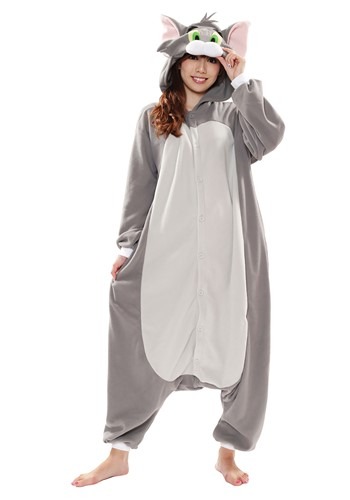 There are two kinds of people in this world. There are those who cheer at the constant persecution suffered by Tom, the cartoon cat from the Tom and Jerry cartoons. They love those cartoons, because the mouse always ends up on top by the end. Then, there are those who just want to give the poor kitty a break.

Sure, sometimes, Tom is kind of a jerk to Jerry, but can you blame him? That little mouse drops anvils on him on a daily basis. Sometimes, Tom is just trying to get a date with that cute girl cat from the down the street and Jerry rolls in to ruin his game. Other times, Tom's owner commands him to catch the freeloading mouse and he's just trying to be a good kitty. Really, the poor feline is just misunderstood!

Now, you can represent the misunderstood kitty cat from the cartoons when you wear this Tom and Jerry Tom Kigurumi! It's a Japanese-style pajama costume the recreates the look of the character from the show. The pajama suit is made of an ultra-soft fleece material that's comfortable enough to take a nap in. It fits with buttons that run down the center of the suit, making easy to slip into at the end of the night. The rib knit cuffs on the sleeves and ankles help give it a snug fit. Finally, the hood features details like appliqued eyes, a plush nose, and a pair of pointy ears to give it a cartoonish look.

Well, maybe those mouse supporters will never understand that cat's point of view! The good news is, when you're dressed up in this Tom pajama costume, you'll be in the right uniform for chasing around those smug rodents!