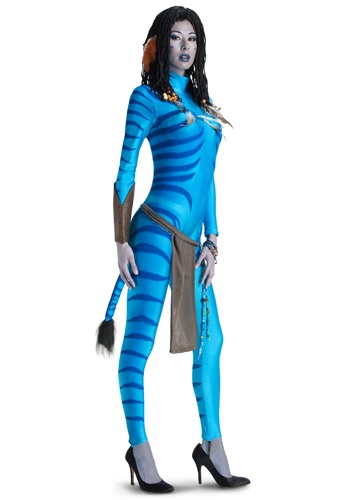 You’ve probably heard a lot of talk about the difficulty of being green, and there’s some truth to that. Like the frog says, when you’re green you blend in with an awful lot of ordinary things. But compare that to being blue. That’s the color of the water that covers 70 percent of Earth’s surface, and the sky that hangs over 100 percent of the same. Being green sounds like a piece of cake by contrast.

Granted, Earth isn’t the domain of the Na’vi, the culture at the heart of James Cameron’s box office blockbuster “Avatar,” but that doesn’t mean they have it any easier. Being under constant threat from extraterrestrial colonizers is a pretty tough gig that requires an equal measure of toughness in return, and Neytiri is among the toughest folks you’ll find on Pandora. She’s both a warrior and a peacemaker who takes on the burden of defending her way of life while simultaneously serving as an ambassador for her people. With that heavy a burden on her shoulders, who could blame her for occasionally feeling a little blue?

Unleash your inner Pandoran warrior with this form-fitting blue turtleneck jumpsuit complete with braided belt, wrist gauntlet, two beaded necklaces, and a stuffed tail. It may not be easy being blue on a permanent basis, but this officially licensed ensemble makes it a breeze to be a Na’vi for a day.