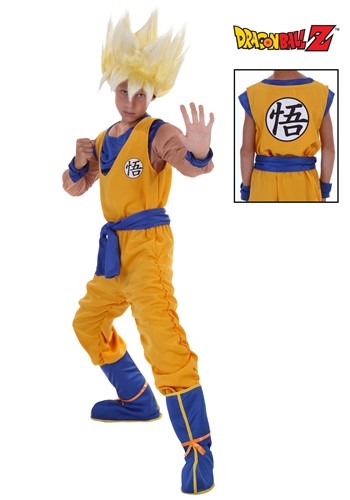 Even when you prepare for everything, there's always that one thing out there that no amount of training could ready you for. If your kid has gone through tons of training and studied everything there is to know about Dragon Ball Z, but he's still worried there's one out there who could best him, then perhaps it's time to power him up in this exclusive Super Saiyan Goku Costume to help him focus his ki!

Goku may hold the distinction of being the most powerful fighter in the known universe, but that doesn't mean he's a vicious fighting machine. Despite being a Saiyan who thrives on battle and gaining power, Goku was raised as an Earthling, and often shows compassion and even mercy to his foes! And when he's not engaged in battle, he's a pretty cheerful and carefree dude. But while his gentler side may seem like a weakness to other Saiyans, it's actually the source of unspeakable power! Intense levels of stress, coupled with his already impressive fighting ability, can cause Goku to transform into his Super Saiyan form; and once that happens, not even the monstrous Majin Buu stands a chance!

Luckily, your kid won't have to go through heavy emotional stress to undergo their own transformation; our officially licensed costume is will take care of that for him! The orange suit features blue accents, boot covers, and arm bands, and is printed with the same details as the anime character. Don't forget to get him the matching wig, and soon his power will be unstoppable!