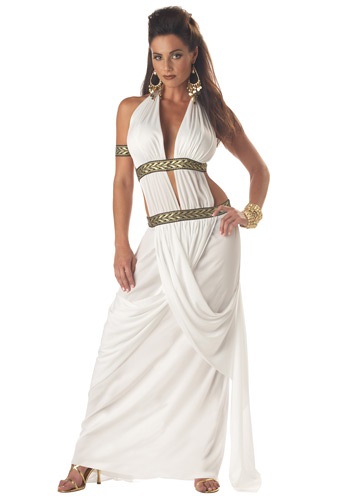 The Ancient Greeks certainly had style nailed down. Nobility! Finery! Passionate and powerful gods! Nights of wild boasting and debauchery! Whether you have ambitions of high society and the delightful antics that might accompany them or grand designs for a place among the ancient gods, there is certainly one thing that holds true: you must look the part. Our modern day has well remembered this and stolen what we can of the ancient times. You’ve heard of the epic toga parties, no doubt? Well, they might brush against some of the style, but they’re still missing the class!

But, take that ancient toga and add in a bit of refinement, some properly placed golden sashes, and a pose that is ready to command whole legions and you quickly are finding yourself in the territory of the divine, whether you are a mortal, yet powerful queen of many or have ascended into the highest peaks of Mount Olympus to claim one of the golden thrones as a goddess. The trouble is figuring which you’d prefer. It seems like a silly question: queen or goddess? Who would possibly choose to give up godhood!? But, those ancient Greek gods are a tough lot! Constantly fighting over even minor things and getting themselves into a ton of trouble. Maybe it’d be easier to simply have to deal with mortal affairs!

The choice can be yours with this Spartan Queen costume. Don’t let the name fool you, because this backless white halter-style dress could be divine just on its own! But, add a ribbon band below the bust with golden detailing, another at your waist, and then a swath of crisscrossing gleaming white fabric over a floor-length skirt and you have a gown that breaks the confines of time itself. Choose the right accessories, including a goddess wig, golden armbands, or a gold leaf circlet and you could tell Zeus it is time to step down and let reign the first Goddess Queen!