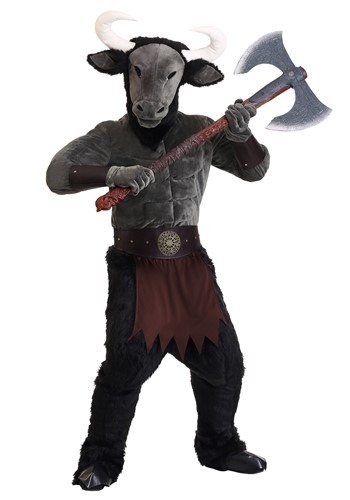 DID SOMEONE SAY LABYRINTH?

Now, we've heard folks say a ton about this awesome magic maze that's been operated for years by some kind of crazy king of the goblins. And, while that sounds fancy and all, everyone needs to know that you can't talk about a labyrinth without bringing up the original terror that stalked its halls. Just because it is ancient history doesn't mean that we can just go an ignore something as huge as this!

That's why we've got a casting call for the biggest brute of all. We're looking for the warrior of ruin, the rampaging warden, the cursed cow.  Okay, maybe that last one is just a little bit insensitive. It isn't the minotaur's fault that Posideon got all uppity about which sacrifice he was given. Really, the story gets pretty risque from there and nobody wants to think of precisely how they were brought into the world.  Let's just not think about that.  Instead, let's focus on how great you're going to be in this Menacing Minotaur Costume!

This bit of ancient Greek mythology is going to have you feeling like a true mystical figure thanks to our own skilled crafters who would put Daedalus to shame. We begin with a padded gray minky shirt to give you those supernatural muscles and matching gauntlets with wide dark brown vinyl cuffs. The padded pants feature long black fur, an elastic waist to make sure you don't have any embarrassing moments when you start to charge. The mask covers your whole head with chest-length fur and features soft-sculpted ivory horns and fuzzy ears.

THE MONSTER OF THE MAZE

Show the world what it is like when the mythical minotaur escapes the Labyrinth of Minos and goes on a fun little rampage. Who knows? With these muscles, that ancient story might have an unexpected sequel coming soon!