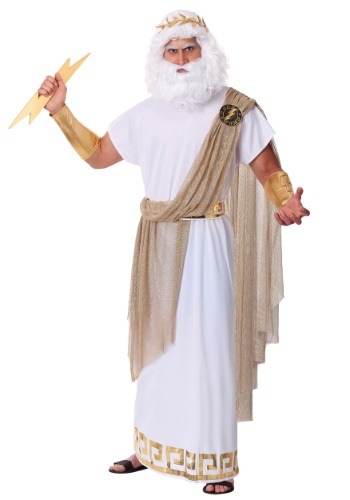 From a Broken Home

Zeus has one messed up family. His dad, Cronus, had a bunch of kids with his Titaness wife, Rhea. He was afraid that they would grow up and steal his throne, so he decided to swallow each of his children as they were born in a single gulp! Rhea was understandably pretty miffed about this, so finally, she decided to hide her next baby from Cronus. She fed that dummy a rock instead and told him it was their latest child, Zeus.

An all-grown-up Zeus, who was now reasonably angry that his dad ate his brothers, decided to do something about it. Zeus gave Cronus a good wallop, forcing him to spit out his brothers and sisters. Then, he went to war with his ol’ dad and took the throne from him, becoming the King of the Gods. Of course, you don’t need to know all of that when you wear this Zeus costume for men!

This plus size Zeus costume turns you into the mighty Greek god from myths. The costume comes with a white tunic that has gold patterning along the bottom, along with a matching belt. The drape has a shimmering golden appeal to it and can be tucked into the belt for a classic Grecian look. A pair of golden gauntlets fit on each arm, providing a regal and powerful style. Finally, the crown asserts your role as king! All of the other Greek gods and goddesses will instantly recognize you as their leader when you wear it.

Zeus, the God of a Great Story

Just suit up in this exclusive costume and you can assume the role of Zeus. And now that you know Zeus’s backstory, you can regale everyone with the tale of how you defeated your weirdo dad and took the throne away from him once and for all!