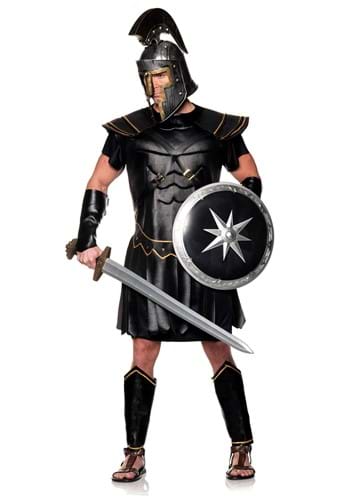 Standing on the hot sand of the Colosseum, you brandish your bloodied sword once more at the crowd, crying out in anger and victory! The two lions lie dead before you, both marred by the many wounds of a long fight. You are already dreaming of the baths and wine that will follow today’s victory when a cage rises up from the ground before you.

A single bloodthirsty tiger paces around the cage, before it finally opens and it races out at you! It looks half-starved, but it would still be plenty strong enough to finish you off. You trust that your Roman Warrior Costume will do its job to keep you from the gates of Hades today, but the Lares and Penates that watch over you will not see you quake. Steeling yourself for another bout, the games continue!

Whether you expect to be thrown into an arena with a starving tiger, a couple of old lions, or a whole host of your fellow gladiators, this armor styled after the classic look of the legionaries will serve you well. The all-black tactical foam breastplate is stronger than the actual lorica segmentata of the legions. A true Roman uses the best, and so should you!

If you are looking for the perfect tactical Roman warrior costume, then this is the one for you! You won’t be signing up for legion duty anytime soon, seeing as how the Western Empire collapsed so long ago, but you can look just as good as they did anyway!