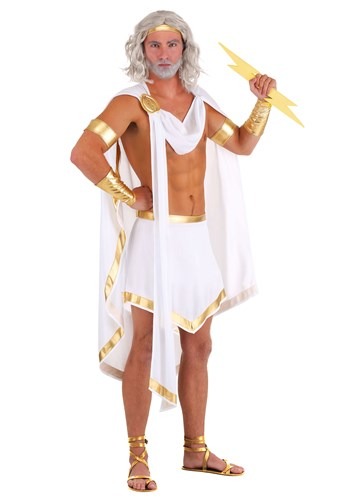 Zeus on the Loose

Life is never boring when you're Zeus! Don't believe us? Well, check out this brief history of the Greek god! When he was born, his Titan father, Cronus, decided to eat him because he thought Zeus might grow up to overthrow him. Well, Rhea, Zeus' mother, didn't approve. She fed Cronus a rock (he wasn't too bright for a Titan) and he went on his merry way, thinking that he had eaten his own child. Of course, Rhea raised Zeus in secret, and he got pretty bent out of shape when he grew up... so, he ended up overthrowing Cronus. After that, Zeus decided to live life like one big party! He spent his time hanging out on Mount Olympus and throwing lightning bolts down to Earth!

Definitely never a dull moment! Well, if you're looking to throw bolts and rule over the gods, then this Men's Zeus Costume is perfect for you!

This Made by Us costume will help you step into the role of the mightiest of all Greek gods! The costume comes with a white kilt that has gold metallic trim and an elastic band in the waist for fitting. The matching white cape drapes around your shoulders and comes with a circle-shaped medallion at the shoulder to give you a regal look. The arm bands and cuffs are gold to match the trim, and the costume also comes with a gold headband to finish the look.

Are you ready to take on the role of head honcho of the Greek pantheon? Do you want to sling lightning bolts like a boss? Then it just might be time for you step into the role of Zeus! With this Made by Us, Zeus costume is the easiest way to become the Greek god!