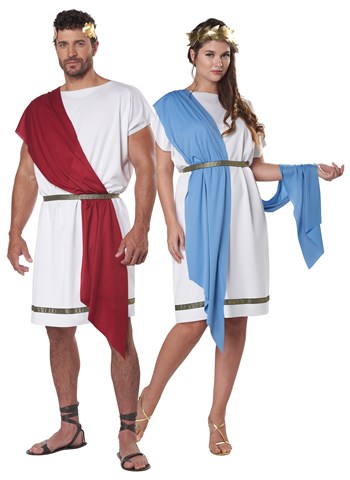 For a century, the Romans ruled and created some pretty remarkable architecture! They had a society filled with some pretty advanced ideas, too! But, of all their inventions, we have to give the highest praise to their fashion sense. This glorious weave of wool is what separated the scholars from the students. What other article of clothing has inspired an entire theme for parties!? It's time to give a little honor to the toga that elevates us all.

It's a pretty common belief that everyone in Greece and Rome wore the toga. But, a real ancient Roman would gasp at the audacity. The true toga was for Roman citizens exclusively. Then you had the ones with golden shawls or even purple stripes! Those meant that you had an emperor or even a member of the Roman Senate striding up to you. Of course, these days, we wear them a bit more freely. (Plus, we've made a few modern adaptations to make them easier, too!)

Jump into the fun of a toga party or some ancient Roman rulership with our Party Toga costume! You won't need 18-feet of cloth to bring your illustrious frame to bear. With this costume, you'll be able to slip into the look of a toga with a simple tunic that features golden trim and accents on a pure white base. The gold belt keeps things cinched thanks to hoop and loop strips in the back. Give yourself a Senatorial boost with the included gold leaf headband and then choose between the blue or red shawl to complete your look.

The Roman Senate might have been fighting with each other for a thousand years. But you won't have to fight to get a winning look. This Party Toga costume is a comfy and stylish way to bring ancient Rome into the modern day!