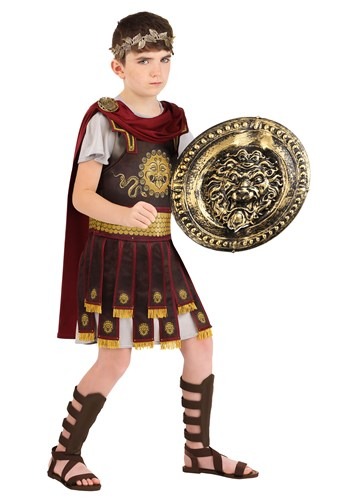 Kids have a wild imagination. You never really know what kind of world they're imagining when you look at them. You might take a glance out of the window and see them playing outside. But they might see it differently. They might be on a legendary quest. You may see them waving a stick through the air, but to them, they're defeating a mythological beast, just as the mighty Hercules did in his tales. They might be playfully wrestling with the family dog, but to them, they're facing off against the deadly Cerberus. He's running through the park, but in his mind, he's bravely standing up against a legion of bad guys!

Well, how about helping your little one's imagination a bit with an amazing outfit? This Made by Us Kid's Roman Warrior Costume gives your child a classic look, straight from ancient history.

Our costume designers are big fans of Roman and Greek mythology. That's why they wanted to create an outfit that captures the look of Hercules. This Roman Warrior Costume starts with white tunic. It also comes with a faux leather chest armor piece, which has red and gold detailing to give it a regal look. It also comes with a red cape, which attaches to the shoulders. The final piece of this costume comes in the form of a leaf crown, which has a metallic paint job. Just place it on your child's head and they'll transform into the greatest warrior that the Roman empire has ever known!

If your child has a wild imagination, or if they just have the guts to fight a hydra with their bare hands, then this child-size Roman Warrior Costume is the perfect outfit for them. Just make sure to equip them with one of our trusty toy swords!