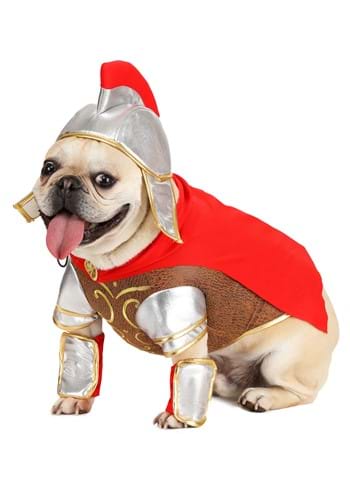 The crowd is dead silent. The champion is about to emerge! Is that a flash of his metal helmet, or a glimpse of his crimson cape? Yes! Here he comes, charging into the arena. He is SO ready for today's battle, especially if it's between him and his squishy purple chew toy, or a tennis ball, or a piece of newspaper, or random sock he found on the floor... anything, really, except for the neighbor's cat (she beats him up). Today, the audience will rally around this pint-sized warrior whose spirit is far bigger than the Coliseum itself!

Dress your furry warrior in this epically hilarious Gladiator Costume for Dogs! The exclusive outfit slips on over your pup's front legs and fastens alont his or her back. The chest and back are made of foam-backed brown faux leather that's decorated with embroidered gold swirls, while the sleeves are made of metallic silver material. Matching silver-tone gauntlets with elastic edges slip over your dog's front legs. The red jersey-knit cape is sewn in place at the neckline and decorated with a gold-tone medallion. The foam-backed helmet has a red crest and stays in place with an elastic cord.

Hail, Caesar! This pup, about to look ridiculously cute in his mock armor, salutes you! By the end of the day, however, even a Roman emperor would be pledging allegiance and service to a warrior who is as sweet as this one. He has powers that the whole Roman Empire cannot withstand, including warm snuggles, little snuffly dog kisses, and pure enthusiasm for chasing anything that moves. Everyone who sees him will be conquered by him!