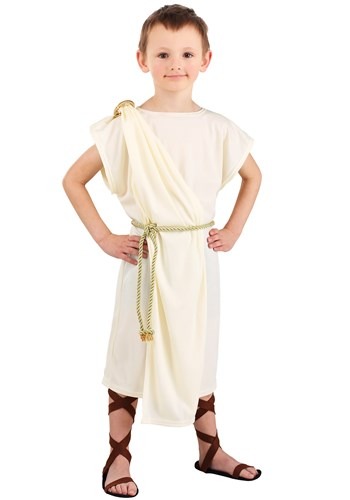 Being a parent is tough. Sometimes, it just creeps up on you and you don't even realize it. And then, suddenly, every aspect of your life suddenly becomes dictated by a half-pint who just learned their his few words! It's oddly adorable when he demands more juice and a toy to play with. It sort of feels like you're trying to keep a young emperor happy, doesn't it? Why, maybe you can even see your child wearing a toga and commanding a whole nation, just like Julius Caesar! Of course, the good news is that "parent" always outranks "Caesar" in the modern age! But you know, that whole toga idea might just make for one adorable outfit for the next costume party! That's precisely why we've made this Toga Costume for toddlers!

Our costume designers wanted to capture the essence of Julius Caesar in a Roman-style costume and they came up with this simple number for your child.

If your child is ready to rule, or if you just want to give him a taste of ancient history, then this Toddler Toga Costume is perfect for your little one. It's one of our Made by Us costumes, which means it's durable and ready for the wear and tear that the average toddler can dish out! The costume comes with a cream-colored robe, designed to look like a Roman toga. The costume also comes with a metallic gold rope belt, which ties around your toddler's waist to help adjust the fit. When your toddler has it on, he'll be ready to command all of the Roman Empire!

The Empire is in Safe Hands

Ready to transform your toddler into the reigning Caeser? Then you're going to need this outfit! The exclusive toga costume gives your toddler a cute way to bring a touch of history and authority to their look this Halloween.