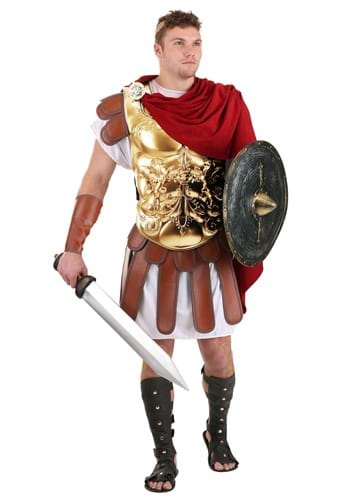 All Fame Is Good Fame...Maybe?

Thousands of years have gone by but never has there been another conqueror like you. You charged the shores of what are now France and Belgium, and claimed them in the name of Rome (the Gauls weren't super excited about this, but whatever). You became one of the most revered and feared dictators in history. You inspired a timeless play by a timeless bard, and last but not least, you looked amazing in a toga. Not many people can pull one off, but you nailed it. And yet -and YET - somehow, you are most well known for a lemony, parmesan-y salad dressing that is a staple of every potluck. Et tu, Brute?

You'll veni, vidi, vici in this exclusively designed Imperial Caesar Costume for Men! The snowy white tunic proclaims your status as rich Roman senator, while the magnificent, molded golden chestpiece with its  rampant lions, scrollwork, and faux-leather detail is clearly the uniform of a victorious leader. Matching leather gauntlets protect your wrists from sword, spear, and arrow blows. A magnificent red cape drapes dashingly around your back and attaches near one shoulder via a golden brooch. A golden laurel headpiece wreathes your noble brow for the final glorious touch.

Forget the anchovies and extra croutons, because tonight begins a new era of Caesar's greatness. Tales will be told of your epic party hijinks and your ability to turn any moment into an adventure worthy of etching into a clay tablet with a blunt stylus. This time, though, there will be no stabbiness at the end.