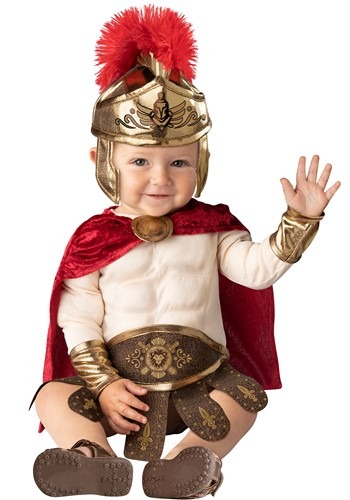 King Leonidas has quite a problem. Greece's greatest enemies, the Persians, are trying to invade! He's going to need to gather up as many of his countrymen as possible to protect his beloved homeland. He knows he'll need the help of the mighty Spartan warriors, but will they be able to crawl over to the battlefield in time to join into the fray? Or will they over-sleep during naptime and miss the whole thing?

Leonidas calls his men to sound the alarm and shake the battle rattles, alerting everyone to the critical situation. He wishes he could send out messengers with information about what's going on, but he hasn't learned to write yet, and he's sure the rest of the troops haven't learned to read yet, anyway. This is a terrible predicament! As the Persian forces draw nearer, Leonidas knows time is running out, and he has no idea how to rally his army to victory or even escape himself. With the rest of his options exhausted, there's only one thing left for him to do: He throws himself onto the ground and starts crying as loudly as he can, hoping that his mommy will come fast and fix everything.

Make your baby battle-ready with this adorable Infant Silly Spartan Costume. The bodysuit is 100 percent polyester and looks just like a Greek warrior's uniform. The top features flesh-colored fabric to look like a bare chest, with golden cuffs at the ends of the sleeves, while the bottom looks like leather armor. There's also a red cape for some drama. The costume also includes a soft fabric helmet, complete with a tuft of red faux feathers.

Leonidas' battle tactics were successful! His mom comes and scoops him up off the ground, carrying him away to safety. He will live to fight another day!