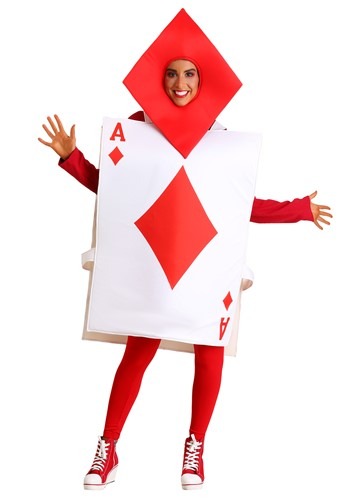 We know that it goes without saying. You have to be very careful in how you phrase a wish when you are standing in front of a genie. We know that everybody already knows that but we still believe that it should be something we reiterate every once and a while. This one is a perfect example. We thought that we phrased things quite clearly and we put together a whole team to get ready to deal with the rush of folks who were looking for our "Suit of Diamonds."

We can't really argue with the genie's logic. He's technically correct which, especially in genie law, is said to be the best kind of correct. So, rather than the glorious blazer lined in 14-carat diamond gemstone (with matching pants), we instead have the commander of the Diamond's Suit of Cards that is rather frustrated that a bunch of its army has been called away from the House of Cards. They're apparently really itching for work!

So, if you're looking for a lucrative career in the field of card-based military, do we have the look for you!? While this jersey tunic was technically brought into existence through the cosmic powers of a genie, it was technically Made By Us through our in-house staff's ambitions. Fortunately, the Ace of Diamond's costume is finely crafted and doesn't require any Hook and Loop fastener or zippers. You can pull the tunic over your head and smile through the bright red hood, secure that the light foam backing will maintain the card frame!

WHICH SHALL BE YOUR ENEMY?

We're not entirely sure who the enemy of the Diamond Suit may be, but this look has you ready to confront them! We suspect it might be the Spade Suits that we brought into being when we mispronounced a word and failed to obtain our futuristic, intergalactic NASA uniforms.