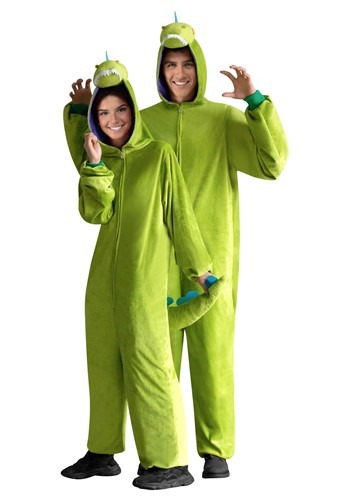 King of the Monsters

There have been many giant, rampaging monsters in film history. You've got King Kong and Mothra and all the dinosaurs from Jurassic Park. But only one monster stands above the rest... literally. One monster is taller than skyscrapers and can smash cars underfoot with ease. One monster is a green radiated lizard who rises from the sea to most commonly wreak havoc on Tokyo. One monster can breathe fire like a terrifying dragon brought to life.

We're talking, of course, of Reptar. (What, were you thinking of some other giant, green, fire-breathing, radioactive lizard?)

Reptar is the biggest, baddest, meanest and most powerful dinosaur ever to roam the earth, and he's also baby Tommy Pickles's favorite cartoon character. Tommy is probably Reptar's biggest fan. He eats Reptar cereal every morning, he's seen the critically panned Reptar on Ice, and he even owns a custom-built Reptar Wagon. Now that is some pretty hard-core fandom! We bet he'd even dress up like him for Halloween if there was a costume...

Take over as king of the costume party with this Rugrats Reptar Union Suit/Onesie. Everyone will recognize your costume as soon as you smash through the door! The green onesie has a zipper on the front chest for easy wear and includes Reptar's head on the hood, as well as his mighty swinging tail in the back. The only thing this costume doesn't include is fire-breathing abilities, but we're guessing that your host is actually pretty okay with that. It's one thing to smash through a wall for a grand entrance, but it's another to accidentally set the whole party on fire!

With this Rugrats Reptar Union Suit/Onesie, you will be the uncontested king of the party. Watch out for Dactar and Robosnail, though. They might try to steal your title! But don't worry, we know that you'll defeat them in the end!