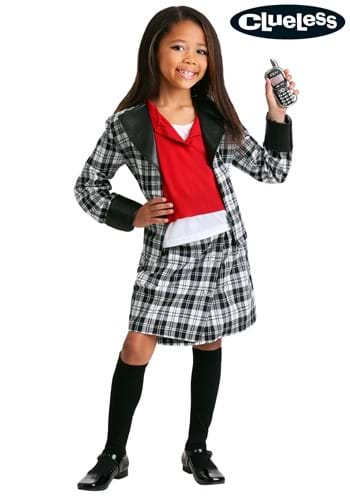 FROM THE SCHOOL BUS TO BEVERLY HILLS

"She's growing up too fast," doesn't begin to describe your little diva. She's 7 going on 17. Just last week she put a hydrating face mask on to watch her favorite cartoons because she "just needed to chill." Yeesh, what happened to playing with dollies and hide-and-go-seek during free time? You're really hoping she's not planning to ask for a cell phone for her 8th birthday but one thing's for sure, the next couple of years will be a wild ride...

Encourage her childhood creativity while indulging her grown-up quirks with one helpful costume: the girl's Clueless Dee costume. This ensemble will be a great addition to her dress-up chest. She'll love putting it on and "acting like a teenager," her favorite game at the moment. It might be a few more years until she's old enough (and mature enough) to watch the popular 90's movie, Clueless, but until then, there's no harm in indulging her imagination!

The girl's Clueless costume is an officially licensed exclusive costume, meaning you can only get it right here! It's a Made by Us design, so it's created from high-quality materials and designed to last through many cycles in the washing machine. The black and white plaid jacket with faux leather lapels is accented by a red top attached to a white tank, perfecting the trendy, layered look. Finally, the costume is completed by an elastic waistband skirt decorated with ornamental kilt pins for a look that's totally Dionne Davenport-approved. (Cher approves too, duh.)

YOU'RE A COOL MOM

Of course, you're a cool mom looking for a cool mom costume. Turn this into a fabulous mommy/daughter costume by wearing the Made by Us Clueless Cher costume for women. Finally, pick up toy cell phones to put the finishing touches on both your looks.