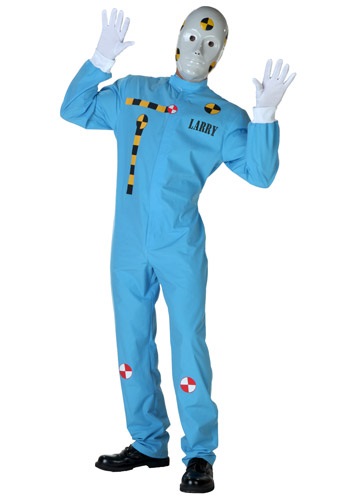 You could learn a lot from a Dummy. Buckle your safety belt.

Everyone drives like a dummy sometimes. Well maybe not everybody, but a lot of people do. However, even if you are a good driver, you can still get into a car accident. It might just be worth it to take some advice from a dummy about safety belts.

You used to love Larry, and Vince. (Larry a little more, because Vince was always ready to quit.) It was so exciting whenever they were on the TV. Sure they were telling you to buckle up, but they were doing it in a cool way. By showing you what happens to dummies when they don't wear their seat belts. They went flying through the windshield. Their arms, or legs becoming detached. Their car being demolished.

This year you can bring Larry back. Dress up in this Crash Test Dummy Costume, and tell people about vehicle safety. Tell them about the dangers of not buckling up. Tell them all about what happens if you put small children in the front seat of a car. Remind them that airbags are pretty great, but you still need your safety belt on to be safe. So, throw on this costume, and watch some Crash Test Dummy commercials from the 80s, and 90s to brush up on your safety tips. Be warned though, you are not as easily repaired as Larry once was.