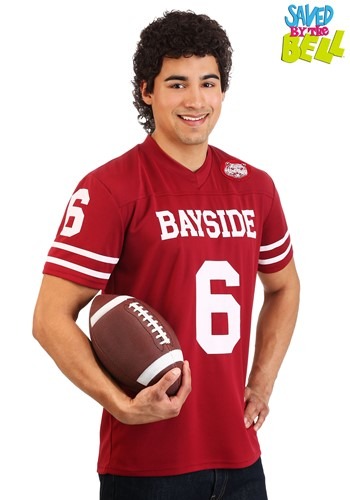 He might wear #6 on the football team, but there is no question that A.C. Slater is the star athlete of the whole school. (Initially much to Zack's dismay.) Clearly, his football legacy is astounding. He's the quarterback of the Bayside Tigers... which doesn't initially say much since the Tiger is the mascot for each and every one of the Bayside sporting events. (We suspect that even Screech is technically a Tiger in the chess club... or was that just because he wore the mascot costume?)

Still, if you're looking to bring everyone's favorite High School sitcom to the modern-day, you can't go wrong with Slater. Just remember that while football is his major passion, he's involved in the basketball team and wrestling team as well. (In fact, wrestling is how he got into college in the later years.) He's a sweet and caring guy, an army brat, and his real name is Albert Clifford—though it's more fun making everyone else guess what the initials stand for, anyway.

Slip on A.C. Slater's iconic football jersey to transform yourself into the popular Saved by the Bell character with this officially licensed costume. The short-sleeved red jersey is colored with Bayside's school colors—red and white—and features both the text of the school and Slater's #6. The left shoulder has a patch of the Bayside Tiger mascot as well. Complete your look with a bit of a macho attitude and that recognizable Mario Lopez short, curly hair.

Show all the school spirit Bayside could ever hope for when show off your Tiger skills in this A.C. Slater costume. All you really need to decide is if Zack is your friend or your rival because your commitment to the team itself is unyielding in this look!