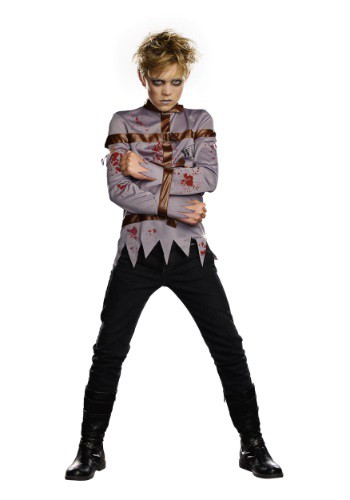 There's nothing that tells your friends and neighbors you're a little on the crazy side quite like a straitjacket. It's an instantly recognizable mark of madness, and automatically makes people think of cruel insane asylums where people shriek into the night and leave behind vengeful, crazy spirits when they finally fall silent. There's nothing quite so unsettling as someone who looks like they've escaped from one of these wretched, evil places. That's why the Boys' Dark Straight Jacket Costume is the perfect look for that kid who's just itching to let out his inner-madman this Halloween!

Patterned after the classic (and creepy) look of straitjackets from the Victorian era (you know, the "Golden Age" of insane asylums), this tunic is unnerving to behold. It's splattered with blood (fake, as far as we know...), has realistic-looking brown restraints, and a jagged hemline makes it look as if your kid's been committed for quite a while. In other words, someone you don't wanna mess with. Best of all, it has "WARD 1031" printed on the side. What is Ward 1031, you ask? It'll have your friends guessing all night... but if we had to guess, we'd say it's probably the one where they put the real "bad" ones!

The best part of this suit is how versatile it is. Just throw it over your kid's head and he's good to go, or apply your own personal touches, like makeup or, of course, more blood. And don't worry. He won't have to be Houdini to get out of it. The arm straps fasten with Hook and Loop fastener, so they're easy to get into and out of. So for a truly psycho (and fun) Halloween, get him the Boys' Dark Straight Jacket Costume!