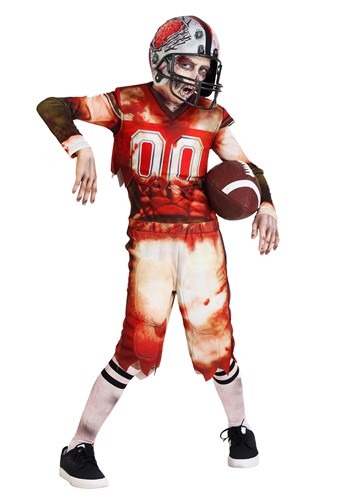 They said that it would be a serious contact sport. They said that players could suffer countless injuries, some of them life-altering. They warned again and again that no one should ever play this sport of violence and barbarism.

What they didn't say was that sometimes victory tacos are the beginning of the zombie breakout and that the entire team might become the very first afflicted zombies. Naturally, there are a few advantages. Zombies don't really need to worry about getting hurt on the field. Things rather snap back into place for some of them, in fact. It turns out that the whole slow-moving and dumb-as-bricks tropes were all wrong, too. Tactics and running are totally within an in-tact zombie's abilities. The dietary restrictions are a bit of a quandary, though. We figured, "Oh, time for braaaains, right?" But, nope. It's much more like vampires. They're all about the food that turned them. Tacos. All day. All night. Forever.

It's time to get a jump on the zombie outbreak in some serious school spirit style. This Zombie Football Player costume for kids is perfect and comes in the right size that'll make your soon-to-be junior varsity athlete live out their zombie unlives in an epic way. The pants and shirt are both tattered to show your child means business on the field. They are printed with bloody stains and bones for that zombie-on-the-go look. The helmet is printed to look battered and shows the rest of the world that this is an undead player that's not going out easy!

One thing you must be warned about and definitely take seriously. Zombies smell bad. It isn't even because of the rotting. A kiddo's frenzied eating habits combined with the all-taco diet of a modern zombie? You thought a football player's sweaty feet were a problem!