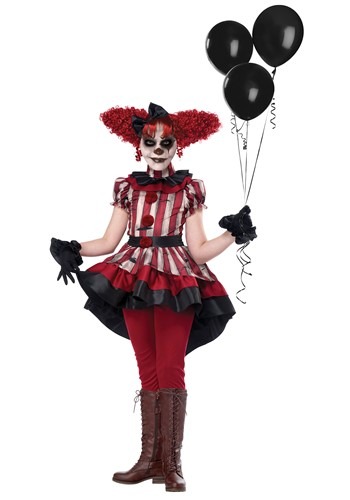 Not all jokes are created equal. In fact, some jokes can be rather irritating. Looking at you, dad, we've heard that "You feel like an ice cream bar? You don't look like an ice cream bar!" joke a million times, now! Here's the thing, some people have been keeping those bad jokes real quiet as of late due to an urban legend. It's said that if you let loose with a groan-able joke at twilight on the eve of a full moon, Giggles the clown might come and find you. First, you'll hear the customary silence after your pun. Then you'll carry on only to notice black balloons floating by where ever you are. Then you'll hear her giggle, quietly at first then louder and louder. Now, we're not sure what happens when she finds you cause we've stopped making bad puns but we're sure whatever comes next is going to be a real circus... wait, what's that balloon doing in the office?

This costume is a fun take on the classic evil clown. The dress looks like it's made from an aged circus tent. The bodice has puffed sleeves and a high neck with a red and black cowl. Pompoms dot down the front, making it more whimsical than ever. The black band cinches at the waist, letting the layered high-low skirt flare out for an extra fun touch!

Frightful clowns have recently been a popular appearance in most everyone's nightmares. Sure, it's not a very nice way to get famous but popularity is popularity, as we see! The aged look, classic pompoms, and stripes will look like it's straight out of a haunted circus. Top it off with a wild and curly wig, gloves, and some seriously disturbing music. Queue the organ music, this look is just the ticket!