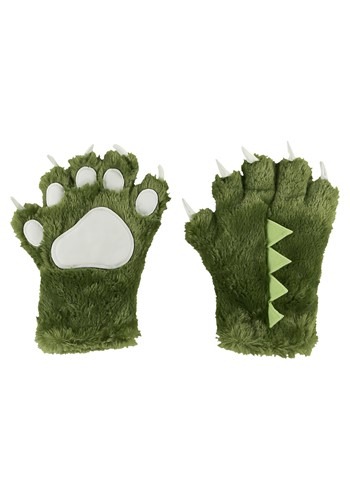 66 million years ago, 75% of the world’s animals became extinct. Smaller species were able to adapt to their new environment, but giants like the tyrannosaurus became nothing more than fossils. However, we believe there was at least 1 sturdy dinosaur species that was able to make its way into the current earth era—and we aren’t talking about chickens.

Introducing dino-bears! Our proof: the paws you see here! Dino-bears were clearly a hybrid born of a smaller dino-species that joined a pack of evolving mammals. Along with becoming warm-blooded (we assume), they grew fur and impressive claws. Unfortunately, the species didn’t last. We assume they were just too cool to remain, like other legendary creatures. Paleontologists haven’t found any dino-bear fossils and will probably argue (pretty conclusively) that they never existed, but we still have hope!

Our theory may not have scientific evidence, but you can spread the word about dino-bears with a pair of gloves inspired by the hybrid creature. Pull on these Adult Dino Paw Mitts and you’ll evolve (devolve?) into the post-apocalyptic species! Experience how the dino-bear kept warm in the green faux fur and fleece-lined mitts. Test the strength of dino-bear paws with vinyl paw pads and claws. With these washable gloves, you’ll be ready to live your own dino-bear adventures as often as you like!

Deep down we knew our theory wasn’t going to survive (much like the creature). The head of Flora and Fauna Research put their foot down. Dino-bears never existed. The Adult Dino Paw Mitts are furry in order to give you a warm accessory that completes their dinosaur costumes. But whether you continue to believe in dino-bears (like us) or you just dress like a dinosaur for Halloween, you’ll be set with these Dino Paws!