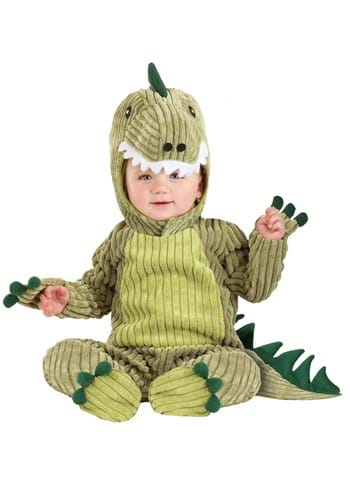 The King of the Babies!

It's a sunny prehistoric day, and dinosaurs are grazing contentedly across the open fields in their peaceful valley. A pack of triceratops are clustered near the edge of a lake, nibbling at bright green grass that blows in the breeze, while a herd of brontosaurus are plucking crunchy leaves off to tops of trees a little farther away. Overhead, some pterodactyls swoop through the clouds. It's an altogether idyllic afternoon...

But suddenly, the ground starts to rumble as something approaches. Something big. Something dangerous. Something hungry.

The pterodactyls disappear from the sky, flapping their powerful wings to carry them away from the area. The brontosauruses twist their long necks to see what's coming. The triceratops paw at the ground nervously.

Trees shake as the unseen predator draws closer. Thump, thump, thump! Finally, it bursts into the valley, and the dinosaurs all shake with dread. It's the terrible T-Rex Baby!

Bring some prehistoric fun to your next costume party with this Infant T-Rex Costume. Other parents dress their kids up in cuddly costumes like bunnies and marshmallows, but you don't have time for that fluffy nonsense. It's a predator-eat-prey world, and you're going to make sure your kid is on the top of the food chain thanks to this Infant T-Rex Costume. The exclusive costume is 90 percent polyester, 10 percent corduroy and fleece fabrics. The green jumpsuit has stuffed fleece scales down the back and an attached tail that also has scales. There are mitts sewn onto the sleeve cuffs, which can fold back to reveal hands, along with matching booties. Both the mitts and the booties have ferocious green claws. The headpiece fastens with a hook-and-loop fastener under the chin and features a solf-sculpted dinosaur snout, teeth and spikes on the top and the back.

Eat or Be Eaten

At the site of the terrifying T-Rex Baby, the dinosaurs start to scatter, desperately running for their lives. Unfortunately, one poor brontosaurus isn't fast enough. The T-Rex Baby gives chase, drawing closer and closer. Finally, it tackles the brontosaurus, knocking it to the ground. In seconds, the fight is over, and the T-Rex Baby begins its feast. It's just how life is in this wild and ruthless land, where the T-Rex Baby is king.