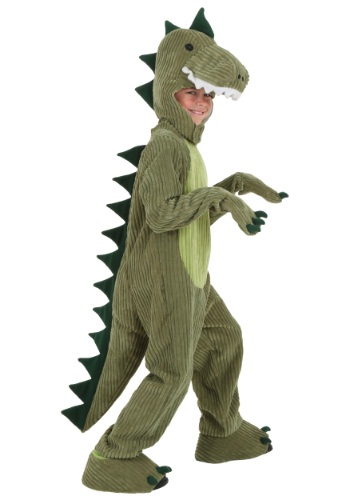 What kid doesn't want to play like a dinosaur?! They get to stomp around the house, practice their roars, and pretend lunch is a bunch of smaller, tastier dinosaurs. Now, your little dino can dress up in our exclusive T-Rex Costume, and turn into a real life monster!

The Tyrannosaurs Rex (or "tyrant lizard king" if you prefer its awesome-sounding English name over its awesome-sounding Latin name) is pretty much the most famous species of dinosaur of all time. If there were ever any creatures that could have been more famous, we never heard about them, because they probably all got eaten by Rexs back in the Cretaceous Period. Recent discoveries have even shown that T. Rexs had feathers! But before you start thinking they looked like chickens, remember that they could grow to be about 12 feet tall and over three times as long... which is a pretty gigantic chicken!

We designed this fearsome costume to look more like the classic depiction of T. Rexs (so, no feathers), but your little one won't mind once they put on this soft and cushy jumpsuit and start stomping around! The suit comes with an attached stuffed tail in back, for them to menacingly wave side to side as they prowl, and the matching headpiece and shoe covers make sure they have the complete "tyrant lizard" look. We also make this costume in adult and toddler sizes, so you can all get in on a dino-sized family costume!