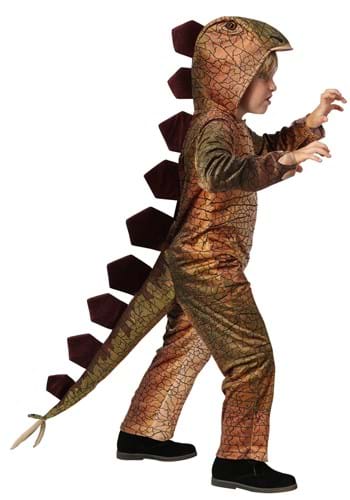 Imagine a world where dinosaurs still walked among us. You'd be outside walking your dog, checking emails on your smartphone, and suddenly a triceratops waddles across the street. If you are out and about in a city and a T-rex moved suddenly, its tail could demolish an entire building. Don't get us wrong, it would be cool, but it would also be very very dangerous. Any given trip to the grocery store could potentially mean that you might end up as lunch for a whole family of raptors. Although these prehistoric beasts of the past are undeniably fascinating and awesome, we've come to the conclusion that it's a blessing in disguise their reign over the world is over. However, that doesn't mean that we don't desire these archaic beasts on a more offbeat (and safer) level.

Luckily, our spiny stegosaurus costume for children allows little dinosaur fans to experience life while imitating a stegosaurus. This hooded jumpsuit features a long tail, spikes, and a character hood, transforming little boys into their favorite dinosaur. Once the costume is zipped, youngsters can get into character by roaring, running, and rumbling. Both parents and kids will see that this costume is perfect for inspiring creative play!

Dinosaurs may no longer walk this earth but a vivid imagination combined with the help of this costume can give your child a glimpse of what it's like to live as a dinosaur. Be sure to check out all of our dino costumes for kids and pretty soon there will be a whole heard of these prehistoric monsters in your backyard!