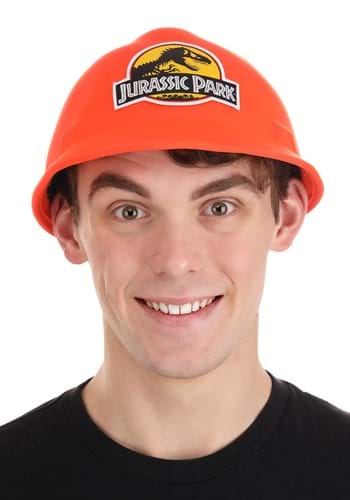 Welcome to Jurassic Park, new recruits! You're part of an elite and privileged team, because you are among the only people in the world who will get to work with living, breathing dinosaurs! Now, we know you're eager to rush off and get a good look at the T-Rex, but we have to go over some equipment briefing first. Everyone take a hard hat as we pass them around. They definitely won't protect you against Allosaurus teeth, but we think they look pretty cool, so who cares!

Show your love for the classic movie trilogy with this officially licensed Jurassic Park Worker Hard Hat for Adults! The orange foam hat is great for shielding your noggin from the sun and dinosaur drool, even if one Raptor bite would crush it like a skittle. The front is decorated with an awesome patch depicting the original park's logo.

That's everything on our clipboard. Remember, your key cards open the gates reeeally slowly, so don't wait to leave a cage until a Stegosaurus is already charging. Also, your walkie-talkies won't work in severe weather or emergency situations. But don't worry - we've only had two incidents this month!