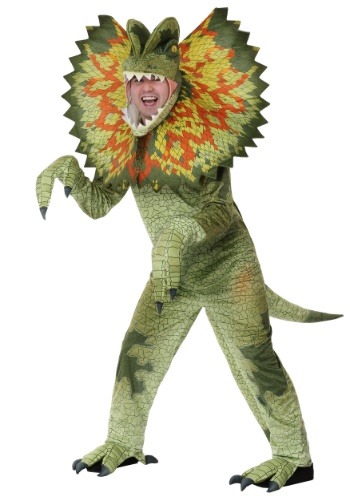 A new dinosaur on the scene

Pffft. T-Rexes and Velociraptors get all the fame and fortune, but we think it's about time for another dinosaur to step into the spotlight. Those other guys had more than their fair share! Let's get a bold, new dinosaur into the mix. Okay, technically not new, per se, since it's still been extinct for millions of years. But we've got a dino who's ready to make a big impression. The bold dilophosaurus!

This dilophosaurus costume features the signature style of a green dinosaur with a double crest on the head, and an intimidating multicolor neck frill. We'll admit, the neck frill is a pop culture creation, and wasn't probably a feature on these ancient dinos. But it looks so cool, we just had to get it on a costume. And that's the reason we designed this dino costume, right here, in our own costume studios. And now it's ready for you. So, you think you've got what it takes to go Dilopho?

Made by Us, this Adult Dilophosaurus Costume is one of our coolest-of-cool costume selections. And we don't mind saying so! It comes with a jumpsuit and headpiece, all fully printed. The jumpsuit features attached mitts to fit over your hands, and shoe covers that fit over your shoes. The headpiece features a soft-sculpted double crest, eyes, and fabric teeth. The all-over print is super detailed, as our graphic designers spent hours creating the intricate design. Altogether, that makes it a one-of-a-kind style that's sure to stand out!

So, yup, when you're ready to get a new dinosaur into the mix this Halloween, this dilophosaurus costume is gonna be a great choice to get a little bit of the spotlight. Shake that frill when you wear it, and you're going to be one fierce and cool dilopho dino!