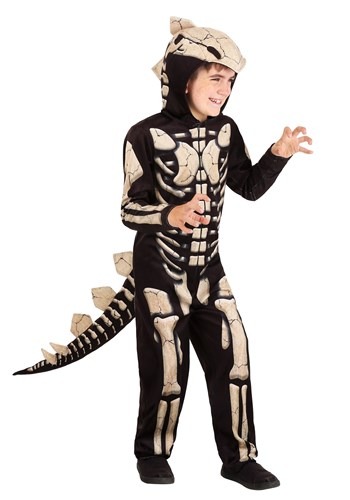 The Real King of Dinosaurs

Here's a question for you? Which dinosaur is the best one? It's a tough question, but if you think about it, there's only one clear answer! It's not the Tyrannosaurs Rex—he might be really big, but those tiny arms make it tough to take him seriously. How about the Triceratops? Nope! They're pretty cool, but those big ol' horns probably get in the way during snack time! Can you imagine trying to munch on your favorite snack with a set of gigantic horns poking out of your forehead? Brontosaurus? It's got to be tough turning your head with that giant neck!

Our costume designers really wanted to capture the true look of Stegosaurus when they designed this Made by Us costume. The costume comes with a full-body jumpsuit that has an attached tail in the back. It comes with printed dinosaur bones throughout the entire suit, to help your child look like a museum exhibit, especiallly with the layer of the back spikes! The costume comes with an attached hood on top, so your child can keep cozy while they play as their favorite dino.

If your child is ready to be the best dinosaur of them all, then they're going to love wearing this fossilized version of the Stegosaurus. Be sure to check out all of our dinosaur costumes to turn the whole family into a Jurassic style group!